Aberford is a large village and parish in the West Riding of Yorkshire to the east of the city of Leeds. It has a population of 1,059 according to the 2001 census, increasing to 1,180 at the 2011 Census.[1] It is situated 12 miles east of Leeds city centre.

Aberford was considered the midway point between London and Edinburgh, being around 200 miles distant from each city and lying on the ancient Great North Road, until the construction of the A1 bypass starting at Hook Moor.

Aberford was in the ancient Kingdom of Elmet, the name given to the local parliamentary constituency. The name 'Aberford' is of Anglo-Saxon origin, approximately translating as 'Eadburg's ford', indicating the settlement's once-strategic importance. Aberford is supposed to have once had a reputation for making pins. An Anglo-Saxon gold ring, inscribed with the name of King Alfred the Great's sister Æthelswith, was found in a ploughed field near the village in 1870 and was bequeathed by A.W. Franks to the British Museum in 1897.[2]

Aberford's growth has historically been along the road and the village has developed a linear rather than nucleated profile. Since the early 1990s much new housing has been constructed, as increasing affluence allows people to move away from city centres to rural and suburban areas. 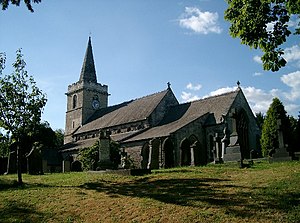 The village contains a number of functional buildings, such as Aberford Church of England primary School, affiliated with the St Ricarius parish church adjacent to it. The school was originally a tithe barn. Towards the southern boundary of the village lie the Aberford Almshouses, built by the two Oliver Gascoigne sisters Mary Isabella and Elizabeth in 1844 to commemorate their father, Richard Oliver Gascoigne and two brothers who died in quick succession in 1842 and 1843. Originally serving as housing for eight poverty-stricken inmates, it is today a business centre occupied by Masternaut UK. At the northern boundary lies the A64 road from Leeds to York and Scarborough. At the South end of Aberford is what used to be Hicklam Mill Farm now a small certified caravan and camping site.

The Parlington Estate holds a monument to the independence of the United States, built by a member of the Gascoigne family (Sir Thomas Gascoigne, last of the Gascoigne blood line). Inscribed on both elevations is the phrase "Liberty in N.America Triumphant MDCCLXXXIII". The Parlington estate holds artefacts and constructions, in particular the 'Dark Arch', a short curved tunnel along Parlington Lane reputed to be haunted. It was built c.1813-14 to shield the residents of Parlington Hall from the traffic passing along Parlington Lane, mostly horse drawn coal traffic, as it was taken to the village distribution point in Aberford for onward travel into the local market.

The lane was later developed for a private railway (Aberford Railway commonly called the "Fly Line") to transport the coal from the Gascoigne's pits to Garforth. The railway closed in 1924. Parlington Hall was left to run to ruins from 1905 after the death of Col F. C. T. Gascoigne, the Hall was largely demolished in the 1950s and 1960s, though the west wing is still intact. The estate was used by the army during the First and Second World Wars. The structures, built during the Second World War and still in existence (2009), were constructed by the soldiers of No.3 Vehicle Repair Depot, part of Royal Army Ordnance Corps.