Headingley is suburban village on the higher ground on the northern edge of Leeds in the West Riding of Yorkshire. It stands some two miles to the north-west of Leeds the city centre. Headingley is famous the world over as the home of Yorkshire cricket; Headingley Stadium. It also hosts part of the campus of Leeds Metropolitan University.

Headingley is in the wapentake of Skyrack, of which it was the centre. The name "Skyrack" is apparently derived from scir ac or "shire oak", which may suggest an oak tree used as a meeting place. An ancient oak, said to be the Shire Oak, stood to the north of St Michael's Church until 1941, and gives its name to two pubs, The Original Oak and The Skyrack.[1] 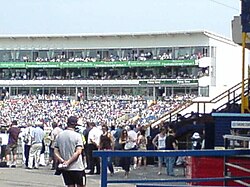 Headingley swells when matches are on; Yorkshire County Cricket Club's home ground is at Headingley Stadium, which has seen some of the great county matches and national test matches. Rugby League is also played in Headingley.

A stone Roman coffin found in 1995 suggests some Roman presence in the area, but Headingley itself is later. The village's name is of Old English origin; the presumed original name Hæddingaleag meaning "Hedda's kin's meadow". This Hedda is unknown, if sometimes identified with Saint Hædde.[2]

Headingley first appears in writing in the Domesday Book of 1086 as Hedingelei or Hedingeleia which records that Ilbert de Lacy held 7 carucates (about 840 acres). During the 13th century William de Poiteven gave land in Headingley to Kirkstall Abbey, and in 1341 the remainder of the township of Headingley-cum-Burley was given to the monastery by the then owner, John de Calverley.

A map of 1711 shows Headingley as having a chapel, cottages, and farmsteads scattered around a triangle of land formed by the merging of routes from north, west and south. Enclosed fields were situated around the settlement with a large tract of common land, Headingley Moor, to the north. In an 1801 census, Headingley's population is given as 300. 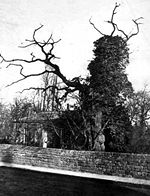 The industrial growth of nearby Leeds from the beginning of the nineteenth century affected Headingley, as industrialists looked to the village for homes for themselves and the great influx of people needed homes too, all away from the filth and pollution of the city. An 1829 Act of Parliament enclosed Headingley Moor and the land was placed for sale. Around 30 workers' cottages had by then encroached on the fringes of the moor before 1829. Land hereabouts was generally cheaper than that at Headingley Hill the affluent villas which had sprung up elsewhere had not spread this far, so smaller, terraced housing grew up around Moor Road and Cottage Road. In the mid 19th century, Far Headingley had begun to develop over what was largely unclaimed common land. 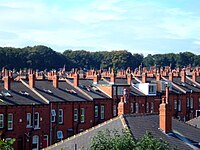 In 1840, the Leeds' Zoological and Botanical Gardens was founded in Headingley, but the venture failed and the zoo closed in 1858, its last visible legacy being the bear pit on Cardigan Road.[3]

Headingley was attached closer to Leeds over the course of the nineteenth century, with the coming of the railway in 1849, then the Leeds Tramway from 1875 to 1959, all of which spurred the growth of residential suburbs. Apart from Beckett Park and the surrounding area, most of Headingley has already been developed by the beginning of the twentieth century. 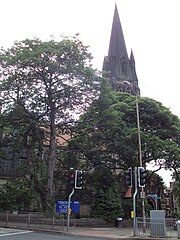 The parish church is St Michael and All Angels. It is a large, steepled church on the corner of Otley Road and St Michael's Road. It was built between 1884–86; the third church on this site. It is Grade-II* listed. The separate parish of Far Headingley has its own parish church; St Chad's, which is also a large steepled church and also Grade-II* listed).[4]

Housing in Headingley is generally of fine Victorian architecture and some early twentieth-century building of lesser architectural note.

Parts of Headingley are included in conservation areas established by the City Council. It are many listed buildings. The Arndale Centre is, alas, a typical example of the 1960s.

"Celebrate Headingley" is an annual series of events organised by Headingley Network, taking place for the ninth time in September 2009. It has been growing and developing since the first one in September 2001. The main intentions are to bring together members of a community which is often seen as beleaguered, to celebrate the diversity and strengths of the local population and to provide opportunities for residents to enjoy each other’s company in a variety of social situations. Events include musical, literary, social and children's events, and local restaurants offer special deals.[5]

Headingley Development Trust [5] was founded by concerned local residents and small businesses, with the objective of promoting and developing a sustainable community in Headingley. With over 825 members, the Trust runs many projects in the area:

The Trust is also refurbishing and developing Headingley's old primary school building on Bennett Road into a Headingley Enterprise and ARTs centre – HEART.