Adel is an ancient parish in the West Riding of Yorkshire that forms a suburb in the north of Leeds. It is situated between Cookridge, Holt Park, Weetwood and Alwoodley. To the north are the villages of Arthington and Bramhope and the market town of Otley.

Adel is situated near the site of a Roman fort, the ancient road from Tadcaster to Ilkley passing nearby. (The footpath by the side of Long Causeway was said to be made from the original Roman stones, until they were removed by the council in the 1960s because they were unsafe. Some of the footpath has been replaced, starting at the junction between Long Causeway and Stairfoot Lane, and continuing up to the entrance of Bedquilts playing fields.) Several inscribed stones from the Romano-British period were discovered in Adel, also a number of Anglo-Saxon stones were discovered in the church foundations during restoration work in 1864. Some of these items are on display in the Leeds City Museum, Cookridge Street.

The Roman name for the area is long thought to have been Burgodunum, but the Yorkshire Archaeological Society argues that this is "dubious".[1][2] An alternative name is also Burgodurum, meaning the Fort by the Waterway. It has also been suggested that this was shortened to Burden, which is similar in sound to the Celtic Verdun, found in Belgium.[3] It is probable that a Saxon village sprang up around the fort and that a church was built in the village. Adel is mentioned in the 1086 Domesday Book as Adele. Another spelling used until 1816 is Addle. Most recent authorities derive the name from the Old English adela ‘dirty, muddy place’,[4] but arguments have also been made for a personal name Ada (or similar Anglo-Saxon names such as Eadda, Eada or Ædda) + Old English lēah 'open ground, lea' (compare the terminus spelling of nearby Headingley DB: Hedingelei & hedingeleia).[5]

The ancient parish of Adel stretches to the River Wharfe in the north and includes Adel, Arthington, Breary, Cookridge and Eccup.

In 1152, the nearby Cistercian abbey at Kirkstall was founded. At the same time, the church of St John the Baptist was built in Adel to replace the older Saxon building. Although the present church is Norman, it looks quite similar to the late 7th century Anglo-Saxon church in Ledsham village, "the oldest church (and the oldest building) standing in West Yorkshire".

The Church of St John the Baptist, Adel parish church, is described as "one of the best and most complete Norman churches in Yorkshire".[6] It is a Grade-I listed building;[7] the sundial,[8] mounting block[9] and several memorials are Grade-II listed.[10][11][12]

It was built in Romanesque style around 1150–1170 and has been little altered since, although a bell-cote was added in 1838–39 by R. D. Chantrell. The doorway, protected by a modern wooden roof, has an ornately carved arch; inside, there are 81 decorative corbels on the north and south walls, and the chancel arch has 37 grotesque beakheads. The mediæval font has an oak canopy by Eric Gill, and possibly a leper's window survives in the chancel though the evidence for this is poor given the nearest Leper Colony was some distance away and other churches were much closer.[13]

The Romanesque bronze doorknocker, often referred to as a Sanctuary Ring, is a replica, as the original was stolen in 2002.[14] It was 'probably made in York c. 1200 (cf. All Saints' Pavement, York)' and 'was of excellent quality ... with a monster's head, probably a lion, clasping the ring and a man's head protruding from its mouth'.[15] The sculpture has been understood to represent the animal swallowing a person,[16] but it has also been suggested that 'there is nothing exaggeratedly fearsome about this lion that we should assume the man is being eaten ... he could be waking up, taking a breath, coming out of the mouth rather than being chewed or swallowed'.[17]

Because of thefts of stones from the graveyard, all the church's paving stones are engraved with crosses.

The paternal grandparents of the Duchess of Cambridge married at Adel Church in December 1946.[18] 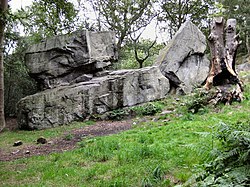 Adel is a mainly residential area of Leeds close to Adel Crags and the Meanwood Valley Trail and has a distinctive countryside feel. Adel also has two primary schools, St John the Baptist Primary School and Adel Primary School.

Close to Adel Church is York Gate, an old farmhouse with a landscaped garden and a pavement maze in the driveway. The gardens, owned by Perennial, the Gardeners' Royal Benevolent Society, are open to the public on regular occasions.[21]

Also close to the church is the Adel Memorial Hall and sports ground. The hall was opened on 14 November 1928 as a memorial to those killed in the First World War. The engraved 20 ton stone outside the hall was moved from Adel Moor in May 1922 and erected on the site of the then future hall. The hall is home to the Bowmen of Adel, who hosted the Scorton Arrow in 1962, 1967, 1970 and 1988, and also Adel Players, an amateur dramatics group founded in 1945 that puts on three productions a year. 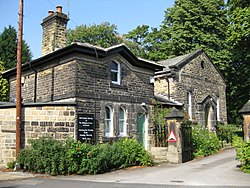 Just to the west is the University of Leeds sports grounds and (now closed) Bodington Hall, which was previously the university's largest hall of residence.