Garforth is a village and ancient parish in the West Riding of Yorkshire, situated to the east of Leeds.

Garforth owes its size to expansion in the 17th and 18th centuries during which the local land-owning Gascoigne family ran several coalmines in the area. The surrounding settlements of Micklefield, Kippax, Swillington, Methley and Allerton Bywater Great and Little Preston are all villages that prospered and grew as a result of the coal industry. Nowadays manufacturing and motor-vehicle repair account for more than a third of the workforce in the area.

More recent expansion can also be traced to a combination of overall economic success in Leeds, and that Garforth is served by transport links. The A1 and M1 are minutes away, and both have recently been linked by an extension of the M1 which passes to the west and north of the village, with two nearby access points at Junctions 46 and 47. The M1 extension led to rapid development of commercial, light industrial and residential sites clustered around Junctions 46 and 47. The village rail link to Kippax and Castleford was closed under the Beeching Axe of the 1960s.

Garforth has been home to 1st Garforth Scout Group since 1908. Garforth & District Lions Club was formed in 1972.

Originally a coal mining area, the collieries of much of east Leeds and surrounding areas closed in the 1960s, although further south mining was still strong in the 1990s and is still prevalent to some degree today. Garforth has increasingly become a commuter village of Leeds. There is a light industrial estate to the north of the village which provides some employment, while the neighbouring Thorpe Business Park in Colton also provides employment. Garforth's rail connections and access to the M1, A1(M) and M62 have made it a desirable area for commuters to live.

Garforth's amenities are similar to some towns in the City of Leeds, such as Otley and Wetherby. Garforth has a Tesco supermarket, the Original Factory Shop department store, several public houses in the village centre, a Co-operative, Sainsburys Local, Costa, Subway, and other shops such as newsagents, charity shops, travel agents and banks. Garforth civic amenities include a library and a one stop centre run by Leeds Council. A coffee shop on Main Street functions partly as a social enterprise, giving its profits to projects in the village. There are also a number of take away food outlets.

The lively Garforth Community Choir was formed in October 2015 and meets at Garforth Academy on Wednesdays at 7.00 pm, in school term time.[1]

Garforth has ten traditional public houses, a mix of restaurants/cafes, and a number of social/affiliated clubs. The pubs are the Miller & Carter Steakhouse (formerly the Old George), the Gaping Goose, the Crusader, the Podger, Quirky Ales (Microbrewery), the Newmarket Inn, the Miners Arms, the Bird in Hand, the Lord Gascoigne (Hungry Horse) and the Briggate (Wetherspoons), the latter which takes its name from the original term for Garforth Main Street, where it is situated on the premises of the former Liberal Club. Most of the public houses sell food. A large garden centre is situated on the A63 heading out of Garforth towards Micklefield.

The East Side Retail Park is a new-build retail site currently being built in Garforth and due to open during 2018.[2]

There are two indoor play areas for children and a large skatepark. 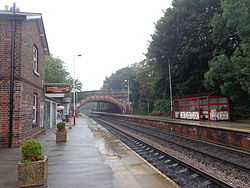 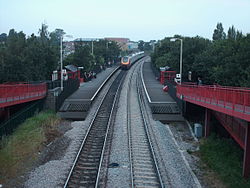 Garforth is situated on the A63, which links it with the M1 and the A1(M), the M62 also lies close by to the south of the village.

Under proposals released on 28 January 2013, Garforth would see the High Speed 2 railway line built close to the village, running adjacent to the M1 motorway. The High Speed Line would cross the existing railway line close to Thorpe Park to the west of the village. This line would carry the spur away from Leeds, towards the East Coast Main Line at Church Fenton.[3] 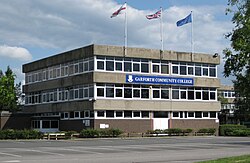 Education establishments in Garforth include a secondary school, primary schools and a vocational performing arts college.

SLP College is a further education college in Garforth, providing specialist vocational training in dance and performing arts. Founded as a dance school, it later developed a full-time performing arts course and is now a course provider for the Trinity College, London professional performing arts qualifications. The college is accredited to the Council for Dance Education and Training and one of the colleges selected to award the government Dance and Drama Awards. 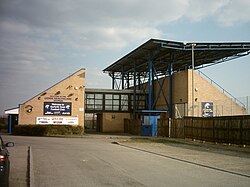 Local football teams are Garforth Town, Garforth W.M.C. A.F.C and Garforth Rangers A.F.C. Garforth Town play at the Genix Healthcare Stadium (formally known as Wheatley Park) which is located in the corner of the Cedar Ridge estate of Garforth.

There are two rugby clubs in Garforth, one League and one Union: Garforth Tigers ARLFC play rugby league and are based at Glebelands. They have junior and senior teams competing in the Yorkshire League.,[4] There is also a men's rugby union team: Garforth RUFC, who play their matches on Garforth Academy's playing fields[5]

There are also two cricket clubs, the Squash and Leisure Centre, and a Leisure World Fitness Centre.

Garforth Golf Club has a course designed by Alister MacKenzie.

The book The Modfather was set in Garforth in the late 1970s and early 1980s detailing David Lines' adolescence in the village and his obsession with Paul Weller.[10]