Guiseley is a small town in the West Riding of Yorkshire, situated south of Otley and Menston and is now effectively a north-western suburb of Leeds.

The A65 road, which passes through the town, is the main shopping street. Guiseley railway station has regular train services into Leeds, Bradford Forster Square and Ilkley stations on the Wharfedale Line. Guiseley is also served by the stations of Menston to the north and Baildon to the south. 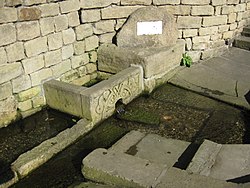 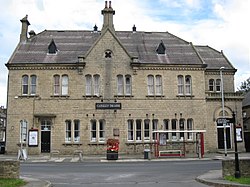 There have been Stone Age and Bronze Age finds and a Roman road nearby.[1] A Saxon settlement was around a spring which is now called Guiseley Wells and provided drinking water.[1] The name is also Saxon (from "Gislic", a name and "ley" a clearing in woodland[1]) and is listed in the Domesday Book as "Gisele."[2]

It was a largely farming community until the 18th century, when cottage-based woollen industry arose. In Victorian times it became industrialized, acquiring a railway connection in 1865 and a Town Hall (now the theatre) in 1867.[1]

The ancient parish also includes the townships of Carlton, Horsforth, Rawdon and Yeadon, all of which became separate civil parishes in 1866.[1] 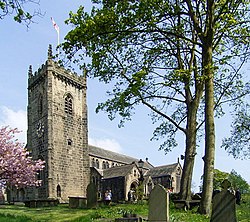 Guiseley's church, dedicated to St Oswald, was the centre of a large parish that included many surrounding villages. It was used by generations of the Longfellow family. Henry Wadsworth Longfellow's 5th great-grandfather left here for the New World in the 17th century. The rector of St Oswald's for several decades was Rev. Robert More (died in 1642), the father-in-law of the English explorer, Captain Christopher Levett.[3] Patrick Brontë and Maria Branwell were married at St Oswald's[1] and became the parents of six children, including Anne, Charlotte and Emily Brontë.

Crompton Parkinson was a major employer until its factory closed in 2004. The town was the home of Silver Cross, a pram manufacturer, whose factory was operational from 1936 to 2002.[4]

The town is known for Harry Ramsden, whose fish and chip shop traded from a small shed next to the tram terminus at White Cross. In 1930 he opened "the world's biggest fish and chip shop". The original restaurant was closed in December 2011. The Wetherby Whaler group purchased the site and planned a £500,000 refurbishment to open during the summer of 2012.[5] The new Wetherby Whaler restaurant opened on 22 May 2012.

Guiseley has two retail parks: Guiseley Retail Park in the centre of town, and Westside Retail Park between Guiseley and Yeadon. The town has a Morrisons supermarket, charity shops and beauty stores on the High Street, as well as many pubs, bars, takeaways and restaurants located around the town and a leisure centre with swimming pool and gym on The Green.

Many of the retail outlets in the town have been established on the converted sites of old factories or mills. Recently, an increasing number of stores of well known leading brands such as Argos, TK Maxx, Marks & Spencer (food), Asda Living, Currys, Costa Coffee, Next and Sports Direct have been opened in the area. McDonald's, KFC and Subway all have stores in the town.

In addition to St Oswald's there is also Guiseley Methodist Church and Guiseley Baptist Church which was built in 1883 on Oxford Road in the old town, and the Kingdom Hall of Jehovah's Witnesses on Otley Road. 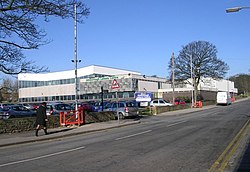 Guiseley's professional football team, Guiseley A.F.C., play at Nethermoor Park. Guiseley Cricket Club shares the club house and plays in the Airedale-Wharfedale Senior Cricket League.[6] Aireborough RUFC play at Nunroyd Park.[7] Local philanthropist Jonathan Peate gave Nethermoor Park (Guiseley) and Nunroyd Park (between Yeadon and Guiseley) to local people in the early 20th century. Two other parks were regenerated in 2011/12, Springfield Road and Parkinson's Park.[8] Parkinson's Park was given to Guiseley in the 1930s by Frank and Albert Parkinson. By 2002 it had become an wasteland with frequent occurrences of antisocial behaviour. It is now owned by Bellway Homes, and its rehabilitation is supported by the Friends of Parkinson's Park.

Guiseley School on Fieldhead Road[10] was built as a secondary modern in the 1960s and is sometimes known as Fieldhead School. Aireborough Grammar School opened in 1910 and closed in 1991.[11]

Harry Corbett, known for his children's television glove puppet character Sooty stage act, lived with his parents, who owned a fish and chip shop on Springfield Road.[14] Tasmin Archer, whose co-written song "Sleeping Satellite" reached number one in the UK charts, and Maurice Lee of The Grumbleweeds lived in the town.[15]