Shakespeare's Way is a waymarked long-distance footpath of 146 miles which celebrtates William Shakespeare and the countryside and towns which inspired him. The route runs through six counties, between Stratford upon Avon and the Globe Theatre in Southwark: the route is intended "to shadow a possible route taken by the Bard of Avon himself when journeying between London where he acted and wrote his plays and his house, wife and children back in Stratford".[1]

The eastern head of the trail is the modern 'Shakespeare's Globe', the beautiful reproduction of Shakespeare's original Globe theatre (near the site of the original Globe), on the south bank of the Thamjes in Southwark. The northern trailhead is Shakespeare's Birthplace; the house in which the Bard was born in the middle of Stratford.

On it course, the way runs from Southwark in metropolitan Surrey, following the River Thames upstream through Surrey, Middlesex, Berkshire and Buckinghamshire, then striking out through the Oxfordshire countryside to Oxford and north to Shakespeare's home town; Stratford upon Avon in Warwickshire.

The waymarked route opened in 2006. 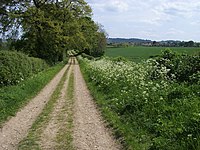 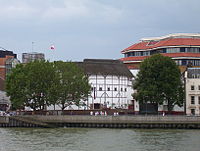 The route, east to west, follows the Thames Path from London westwards to Kew and up the Grand Union Canal and the Thames Path again to Marlow. Thence it heads over the Chiltern Hills until it reaches the Thames again just south of Oxford, crossing to the Berkshire bank before heading north to the city and north through the edge of the Cotswolds.