Chipping Norton, is a wind-swept market town of western Oxfordshire. It stands is situated high up on a hill and rivals nearby Stow-on-the-Wold, Gloucestershire for its weather. These two Cotswold towns are the focus for local shopping, markets, civic and cultural activities. The latter is much more of a tourist destination, with the former being much more locally oriented.

The fine Town Hall overlooks the High Street and market place with streets sloping off according to the local geography. The historic development of the streets becomes apparent whist walking around with market stalls becoming permanent and creating smaller streets and the burgage plots behind the buildings on the High Street. As in other Cotswold towns, the wool trade was also prominent here, leading to the construction of the well-lit St Mary's Church.

The Chipping Norton Museum, Chipping Norton Theatre and Gallery provide a rich cultural focus for the town. The Church of St Mary is tucked away down Church Lane and is sited near the remains of the Castle mound. The former Banbury and Cheltenham Direct Railway could perhaps have eased some of the modern day traffic which often chokes the town. The remains of the station site is now and industrial park, sited adjacent to the Bliss Tweed Mill, now residential apartments.

The Rollright Stones, a stone circle stand, 2½ miles north of Chipping Norton. Their original is unknown but they are evidence of prehistoric habitation in the area.

The town's name means simply 'market north town', from the Old English ceping (“market”) and norþtun ("north estate"). Professor John Blair of the University of Oxford suggested in 2000, at a lecture in Chipping Norton Town Hall that Charlbury to the south, now a smaller town, was in Anglo-Saxon times a more important minster town and that the norþtun indicated that it was north of and perhaps dependent on Charlbury.

The parish church of Saint Mary the Virgin was built on the town’s hill, next to the castle. Parts of the present building may date from the 12th century[1] and it certainly retains features from the 13th and 14th centuries.[2] The nave was largely rebuilt in about 1485 with a clerestorey in the Perpendicular Gothic style.[3] This rebuilding is believed to have been funded by John Ashfield, a wool merchant, making St. Mary's an example of a "wool church".[3] The bell tower was rebuilt in 1825[1][4] and has a peal of eight bells.[5]

Chipping Norton began as a small village at the foot of a hill. A Norman motte-and-bailey castle was built on the hill, of which only the earthworks remain.

In the Middle Ages wool production made the Cotswolds one of the wealthiest parts of England. Many of the mediaeval buildings built in the town as a result of that trade still survive. It became the new centre of the town and remains so today. There is still a weekly market every Wednesday and the "Mop Fair" in September. In 1205 a new marketplace was laid out higher up the hill.

Later, sheep farming was largely displaced by arable farms, but agriculture remained of the first importance in this part of the Oxfordshire Cotswolds. Many of the original houses around the market place were rebuilt in the 18th century with fashionable Georgian frontages.

An inscription on the almshouses records that they were built in 1640 as "The work and gift of Henry Cornish, gent".[6]

History from the 18th century onwards

In 1796 James and William Hitchman founded Hitchman's Brewery in West Street. In 1849 the business built a larger brewery in Albion Street that included a malthouse and its own water wells. Three generations of Hitchmans ran the brewery, but in 1890 Alfred Hitchman sold the business as a limited company. The new company grew by buying other breweries in 1891 and 1917. In 1924 it merged with Hunt Edmunds of Banbury, and in 1931 Hunt Edmunds Hitchmans closed the brewery in Chipping Norton.[7]

Other industries in the town included a wool mill (see below), a glove-making factory, a tannery and an iron foundry.

Chipping Norton had a workhouse by the 1770s, replaced in 1836 by a larger building with four wings radiating from an octagonal central building, similar to Witney workhouse, which was built by the same architect. A chapel was added in 1856-57. In 1929 the workhouse closed. The building became a hospital in the Second World War, absorbed into he National Health Service in 1948 as Cotshill Hospital which later served as a psychiatric hospital. The hospital was closed in 1983.[8] and has since been redeveloped as private residences. 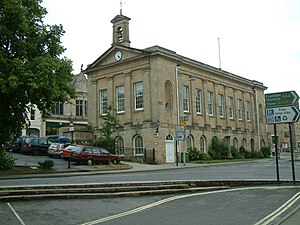 The Chipping Norton Railway opened in 1855, linking the town with Kingham on the Oxford, Worcester and Wolverhampton Railway.[9] In 1887 a second railway opened, linking Chipping Norton to the Oxford and Rugby Railway at King's Sutton, and the CNR became part of the resulting Banbury and Cheltenham Direct Railway. Extending the railway from Chipping Norton involved digging a tunnel 685 yards long[10] under Elmsfield Farm to the west of the town.

In May 1873 rioting took place following the conviction and sentencing of the Ascott Martyrs, sixteen local women accused of trying to interfere with strikebreakers at a farm.

Bliss Mill, on the western side of the town, was built as a tweed mill in 1872. In 1913-14 the millworkers struck for eight months. The mill closed in 1980 and has since been converted into apartments. It remains a local landmark, clearly visible from the Worcester Road.