From Wikishire
(Redirected from Stratford upon Avon)
Jump to: navigation, search

Stratford-upon-Avon is a pretty market town in southern Warwickshire, world-famous as the home of the playwright and poet William Shakespeare.

Stratford lies on the River Avon, 22 miles south-east of the county's largest town, Birmingham and 8 miles south-west of the county town, Warwick. It is a popular tourist destination owing to its status as birthplace of William Shakespeare, receiving about three million visitors a year from all over the world.[1] The Royal Shakespeare Company resides in Stratford's Royal Shakespeare Theatre, one of Britain's most important cultural venues. 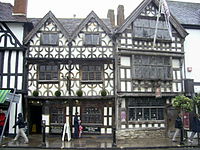 The town is stands on the banks of the River Avon, with meadows running down to the river. Shakespeare's birthplace stands in the town centre and various other houses connected to him.

The town centre has thriving streets with much of historic as well as practical interest. 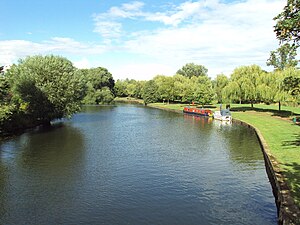 The Avon in Stratford

Stratford grew up as a market town in mediaeval times. The original charters of the town were granted in 1196, making Stratford officially over 800 years old. Its name is Old English, strætford simply meaning "street-ford", referring to a ford carrying a street across the river, presumably the Avon.

Stratford is also close to the Cotswolds, with Chipping Campden 10 miles to the south. As a major sheep-producing area, the Cotswolds, up until the latter part of the 19th century, regarded Stratford as one of its main centres for the slaughter, marketing, and distribution of sheep and wool. As a consequence Stratford also became a centre for tanning during the 15th–17th centuries. William Shakespeare's father, John Shakespeare, was a glover of the town, a trade relying on sheepskin. Both the river and the Roman road served as trade routes for the town.

Stratford is today the site of several theatres:

The first real theatre in Stratford was a temporary wooden affair built in 1769 by the actor David Garrick for his Jubilee celebrations of that year to mark Shakespeare's birthday. The theatre, built not far from the site of the present Royal Shakespeare Theatre, was almost washed away in two days of torrential rain that resulted in terrible flooding.

A small theatre known as The Royal Shakespeare Rooms was built in the gardens of Shakespeare's New Place home in the early 19th century but became derelict by the 1860s.

In the early 1870s, Charles Flower gave several acres of riverside land to the local council on the understanding that a permanent theatre be built in honour of Shakespeare's memory, and by 1879 the first Shakespeare Memorial Theatre had been completed. It proved to be a huge success, and by the early 20th century was effectively being run by the actor/manager Frank Benson, later Sir Frank Benson. The theatre burned down in 1926, and the artistic director, William Bridges-Adams, moved all productions to the local cinema.

An architectural competition was arranged to elicit designs for a new theatre, with the winner, English architect Elisabeth Scott, creating what we see on the riverside today. The new theatre, adjoining what was left of the old theatre, was opened by the Prince of Wales, later Edward VIII, in 1932. Sir Peter Hall was appointed artistic director (designate) in 1959, and formed the Royal Shakespeare Company (RSC) in 1961.

The Swan Theatre was created in the 1980s out of the shell of the remains of the original Memorial Theatre, quickly becoming one of the finest acting spaces in Britain.

The Waterside Theatre (which is not part of the Royal Shakespeare Theatre complex) re-opened in December 2004, then closed again in September 2008. During this span, the theatre housed the Shakespearience visitor attraction.[2]

For many years Palmer's Farm was thought to be the home of Anne Hathaway and was known as "Anne Hathaway's Cottage", until documents proved the correct cottage to be that next door, which by happy chance was already owned by the Trust and maintained in an appropriate conditions, so the name moved to its proper bearer.

Elsewhere near Stratford are farms and buildings at Snitterfield which belonged to the Shakespeare family.

At the top end of Waterside is Holy Trinity Church, where Shakespeare was baptised and is buried.

Not all of the attractions in and around the town relate to the Bard. Others include the Stratford Butterfly Farm, which is on the eastern side of the river and the Bancroft Gardens and Stratford Armouries, three miles from the centre of Stratford on Gospel Oak Lane.

Each year on 12 October (unless this is a Sunday, in which case 11 October) Stratford hosts one of the largest Mop Fairs in the country. Then, on the second Saturday following, the smaller Runaway Mop fair is held. 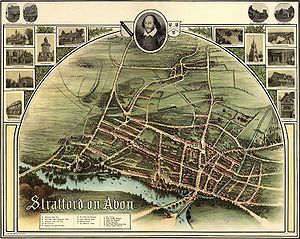 Henley Street, one of the town's oldest streets, has undergone substantial architectural change between the sixteenth and nineteenth centuries. John Shakespeare's large half-timbered]] dwelling, purchased by him in 1556, was in 1564 the birthplace of his son William]]. According to a descriptive placard provided for tourists there:

"The property remained in the ownership of Shakespeare's direct descendants until 1670, when his granddaughter, Elizabeth Barnard, died. As she had no children, Elizabeth left the estate to her relative Thomas Hart, Shakespeare's great-nephew. The main house became a tenanted inn called the Maidenhead (later the Swan and Maidenhead) following the death of John Shakespeare in 1601. Members of the Hart family continued living in the small adjoining cottage throughout the century.

At the end of the 19th century, Edward Gibbs 'renovated' the building to represent more closely the original Tudor style farmhouse. Adjacent to Shakespeare's Birthplace stands the Shakespeare Centre, completed in 1964 and not far from the Carnegie Library, opened in 1905.

The large half-timbered building which now comprises numbers 17, 18 and 19 was formerly the White Lion Inn.[3] It is first mentioned in 1603.[4] and was adjoined on the east by a smaller inn called the 'Swan'. In 1745 the latter was purchased by John Payton, who also acquired the 'Lion' five years later and rebuilt the whole premises on a greatly enlarged scale. (Cal. of Trust Title Deeds, no. 147.) The work was completed by James Collins of Birmingham, builder, in 1753. (Contract, Trust Title Deeds, no. 167. Payton 'brought the house into great vogue'[5] though Byng in 1792 complained that 'at the noted White Lion, I met with nothing but incivility' (cited from Torrington Diaries (ed. Andrews), iii, 152).[3] Payton was succeeded as innkeeper by his son John, and its reputation as one of the best inns on the Holyhead road must have contributed not a little to the prosperity of the town. Garrick stayed at the 'White Lion' during the Jubilee of 1769 (Saunders MSS. 82, fol. 20)[3] and George IV, as Prince Regent, visited it when he came to Stratford in 1806.[5] Its great days came to an end after John Payton the younger sold it to Thomas Arkell in 1823.[3]

Henley Street is now a major tourist and shopping precinct with many al fresco cafés and street entertainers. 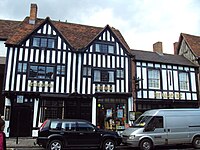 Sheep Street runs from Ely Street eastwards to the Waterside. It was a residential quarter in the 16th century, some of the buildings were rebuilt following the fire of 1595, although many, such as Number 40, date from 1480. Formerly a two storey building that was extended in the early twentieth century has a lower story of substantial close-set studding: the upper is of more widely spaced thin vertical timbers.[6]

As the name suggests Sheep Street, which leads down from the Town Hall to Waterside and the RST, was from early times and until the late 19th century, the area where sheep, brought from the neighbouring Cotswold Hills, were slaughtered and butchered. Today it is the restaurant centre of the town. Sheep Street also has some long established ladies clothing shops.

The Shrieves House is one of the oldest still lived in houses in the town and Shakespeare is said to have based his character of Sir John Falstaff on one of the residents, his godson's uncle. Oliver Cromwell is thought to have stayed here in 1651, and wrote a letter from the town to Lord Wharton]] on 27 August 1651,[7] before the second battle of Worcester.

Behind The Shrieves House is a museum called "Tudor World" with recreations of 16th century life in theatrical settings.

This area of Stratford, which runs from the foot of Bridge Street to Holy Trinity Church (and leads directly off Sheep Street and Scholars Lane) runs alongside the River Avon and offers access to the Waterside Theatre and all areas of the RST. The RST is currently undergoing great renovation works, including work to the Bancroft Gardens at the front of the main RST building.

The Bancroft Gardens run from Waterside to the River Avon and include a canal basin. During the summer months there are often street performers performing to the public on the lawns. 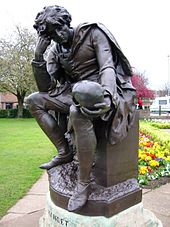 Apart from tourism, which is a major employer locally, especially in the hotel, hospitality industry and catering sectors, other industries in the town are boat building and maintenance, bicycles, mechanical and electrical engineering, food manufacture, Information Technology, and call centre and service sector activities (both of which are growing sectors), a large motor sales sector, industrial plant hire, building suppliers, market gardening, farming, storage and transport logistics, finance and insurance, and a large retail sector.

Major employers in the town include the NFU Mutual Insurance Company (and Avon Insurance), AMEC, Tesco, Morrisons, Marks & Spencer, Debenhams, B & Q and Pashley Cycles. There are, nominally, three theatres run by the prestigious Royal Shakespeare Company, which attract large audiences and income for the town.

Stratford is close to Birmingham, Warwickshire's largest city and Britain's second-largest, and is easily accessible from junction 15 of the M40 motorway. The 7-mile, £12 million Stratford Northern Bypass opened in June 1987 as the A422.

Stratford-upon-Avon railway station has good rail links from Birmingham (Snow Hill station and Moor Street station) and from London, with up to seven direct trains a day from Marylebone station. There are plans for a new railway station north of the town, adjacent to the A46 bypass. It will be called Stratford Parkway railway station.

The Stratford on Avon and Broadway Railway Society aims to re-open the closed railway line from Stratford-upon-Avon to Honeybourne, with a later extension to Broadway, Worcestershire.

The town has numerous cycle paths, and is the terminus of the Stratford-upon-Avon Canal where it meets the Avon. A park and ride]] scheme was launched in 2006. The Stratford Greenway]] is a 5-mile traffic-free cycle path, which used to be part of the rail network until the early 1960s and is now part of the Sustrans National Cycle Network (routes NCN5 and NCN41). Starting from town it heads along the river and racecourse towards Welford-on-Avon and Long Marston with a cycle hire and café available at the start of the Greenway at Seven Meadows Road.