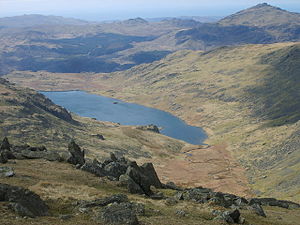 Seathwaite Tarn is a tarn in the Furness Fells of Lancashire North of the Sands, within the Lake District. The tarn is on the saddle between the Old Man of Coniston, which is Lancashire's county top, and Grey Friar (to the north). Above its head, to the east, rises Brim Fell on the ridge between The Old Man and Swirl How.

The tarns sits above the village of Seathwaite, which lies to the southwest in Dunnerdale.

The tarn was considerably enlarged in 1904 in order to provide a drinking water reservoir, for which a dam was biult. During the dam construction some of the navvies rioted damaging buildings in the village, several rioters were shot, one dying the next day.[1] 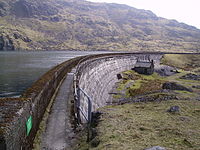 The dam before repairs and reconstruction in 2010

The dam is almost 400 yards long and is concrete cored with slate buttresses, the resulting depth of the tarn being around 80 feet. Water is not abstracted directly from the tarn, but flows some distance downriver to an off-take weir.

On the slopes of Brim Fell, above the head of the reservoir, are the remains of Seathwaite Tarn Mine. This was worked for copper in the mid 19th century, and also appears as a location in the novel The Plague Dogs by Richard Adams. Rocks in the area were the first confirmed occurrence of wittichenite in the British Isles.

Seathwaite Tarn has suffered from acidification. An experiment in 1992–1993 to reduce the acidification by using a phosphorus-based fertiliser increased the pH from 5.1 to 5.6 and changed the levels of the different species of the rotifer assemblage significantly.[3]