Lancashire North of the Sands 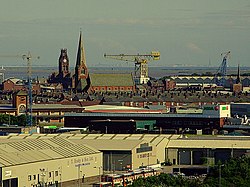 Barrow-in-Furness, looking over to Blackpool 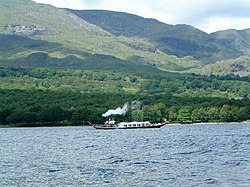 Lancashire North of the Sands is that part of Lancashire which lies to the north and west of the Kent estuary, where the southernmost spur of Westmorland steps between and divides the two parts of Lancashire. The two parts are divided by the sands of Morecambe Bay or united by them. An ancient footpath may be followed across the sands uniting the two parts of the county, though the sands are treacherous and must not be attempted without the Queen's Guide to the Sands, who is appointed for this purpose.

This northern part of Lancashire is all part of the Lonsdale Hundred and so it is also known as North Lonsdale. It is also known as Furness, although this name properly belongs only to the Furness Peninsula ("Low Furness") and its hinterland, the Furness Fells and Grizedale Forest, which together account for the greater part.

The Furness region consists mostly of low-lying hills, forests and flats, with some higher ground towards the north. It is joined to the main body of the county by the sands of Morecambe Bay.

The highest point of the region is Coniston Old Man at 2,634 feet, the highest spot in Lancashire. Other notable summits include Dow Crag, Wetherlam and Swirl How which, together with "The Old Man", are known as the Furness Fells. Gummer's How is a prominent hill in the east of the region.

Lakes include Windermere, Coniston Water and Esthwaite Water. The wide expanse of Grizedale Forest stands between these lakes.

The Furness peninsula reaches southward into the Irish Sea and marks the western edge of Morecambe Bay. The southern end of the peninsula is dominated by the bay's tidal mudflats.

Barrow-in-Furness stands on the peninsula.

A long thin island, Walney Island lies off the peninsula's south-west coast. The channel between the two has other islands.

High Furness is the northern part of the area.[1] Much of High Furness is within the Lake District National Park, and contains the Furness Fells. Its boundaries are the county boundaries; Lake Windermere to the east, the River Duddon to the west and the Hardknott and Wrynose passes in the north.

Windermere is England's largest body of water, shared with Westmorland.

The Cartmel Peninsula juts south into Morecombe Bay between the estuaries of the rivers Leven and Kent.

The Cartmel Peninsula is largely rural. Its only town is Grange-over-Sands, a Victorian seaside resort, with the rest dominated by limestone outcrops and the overlooking Lakeland fells. In the Middle Ages the peninsula was controlled by the monks of Cartmel Priory. The Priory was dissolved as such but its imposing church now seves as the parish church at Cartmel.

By the time of the Domesday Book, the lands north of the sands were was at the very north-western corner of the English kingdom, disputed by England and Scotland. The Domesday Book records twenty-six vills or townships forming the Manor of Hougun as having been held by Earl Tostig. Houganai or island of Hougun was also the name given to the adjacent Walney Island. Hougun (believed to derive from the Old Norse word haugr meaning hill or mound) was the name given to Furness.[2][3]

The latter Middle Ages saw dominance by the monks of Furness Abbey. They owned much of the local land, and built structures such as Piel Castle. Buildings from this age are in the traditional sandstone of the region, which was later used for the gothic town hall of Barrow-in-Furness in the Victorian era. At one stage, the power and wealth of Furness Abbey was exceeded in the United Kingdom only by Kirkstall Abbey in Leeds. However, the monastery fell to ruins at the Dissolution of the Monasteries in the 1530s. The Abbey's lands in Furness escheated to the Duchy of Lancaster in 1540.

Furness and Cartmel remained a remote farming and fishing district, accessible only across the dangerous sands of Morecambe Bay. William Wordsworth was among those who enjoyed the remote splendour of the area, writing a number of sonnets about local features such as Piel Castle and the River Duddon. The highland areas of High Furness began to experience tourism in the late 18th century, before the Victorian tourist boom.

The fortunes of this part of Lancashire changed dramatically in 1840s and 1850s, when William Schneider found the second largest iron ore deposits in the United Kingdom at Askam-in-Furness. Further resources were found at Dalton-in-Furness, Lindal-in-Furness and Roose. The Furness Railway was built to transport this ore, providing the area with its first safe transport route to the rest of Great Britain.

The iron ore and steelworks were, at their time, the biggest in the world. The population of Barrow-in-Furness rose from a few hundred to 47,000 by 1881, bypassing Dalton-in-Furness and Ulverston as the area's biggest town, and engulfing a number of smaller villages along the way. The Furness Railway expanded to the mining sites at Coniston and Greenodd, and helped develop Barrow along a unique town plan. Mining in Furness reached its peak in 1882, when 1,408,693 tons of ore were won. At the same time, the popularity of tourism in the Coniston and Hawkshead areas increased, popularised in part by the work of John Ruskin.

Tourism in High Furness was promoted by the writings of Beatrix Potter in the early part of the 20th century. Potter was one of the largest landowners in the area, eventually donating her many properties to the National Trust. In particular, sites such as Coniston Water, Tarn Hows and Windermere became popular.

Iron and steel soon gave over to shipbuilding in Low Furness, with Barrow's docks becoming one of the largest in the United Kingdom. In particular, submarine development became a speciality: the Royal Navy's first submarines built there. During the World Wars, this allowed Furness to escape many of the economic problems that other areas suffered, due to the constant work provided by the military. Although tourism declined, the rural areas of Furness were able to rely on agriculture for survival.

After the Second World War, demand for ships and submarines remained high, while the development of the Lake District National Park fostered tourism further. Attractions such as the Lakeside and Haverthwaite Railway, steamers on Windermere and Coniston Water, and fell walking, caused parts of Furness to become dependent on the tourist trade.

In the early 1990s, the decline of shipbuilding due to the end of the Cold War led to mass redundancies in the area. The shipyard's employment figures fell from 20,000 to 3,000 in a twenty year period. However, the shipyard in Barrow remains England's busiest and the only nuclear submarine facility in the country. Tourism has increased even more, with the Aquarium of the Lakes and South Lakes Wild Animal Park among the newer attractions.

Transport has become an increasingly controversial issue, with conservation groups and local business clashing over the need for improvements to the A590 trunk road, the main link to the M6 Motorway. Proposals for a road bridge over Morecambe Bay have appeared, but are yet to progress beyond the planning stages.

There are few towns north of the sands with a population over 10,000:

Lancashire towns north of the sands include: 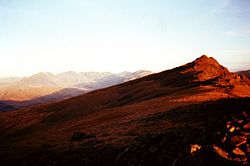 Lancashire does not possess any of the highest mountains of the Lake District but has a gentler landscape. High Furness contains the Furness Fells and the Grizedale Forest.

The main waters of Furness are: