Swirl How is a fell in the Furness Fells of northern Lancashire. It stands between Coniston and the Duddon Valley.

The Coniston (or Furness) Fells form the watershed between Coniston Water and the Duddon valley to the west. The range begins at Wrynose Pass and runs south for around 10 miles before petering out at Broughton in Furness on the Duddon Estuary. Alfred Wainwright in his influential Pictorial Guide to the Lakeland Fells took only the northern half of the range as Lakeland proper, consigning the lower fells to the south to a supplementary work The Outlying Fells of Lakeland. Swirl How being the highest of the Coniston Fells therefore qualifies as one of the 214 "Wainwrights". Later guidebook writers have chosen to include the whole range in their main volumes.[1][2]

The height of Swirl Fell is recorded as 2,631 feet, but there is some doubt in the literature: it has also been stated as or 2,638 feet. This takes on a greater significance since if the latter measurement is correct the Swirl How is the highest point of the Coniston Fells and the highest point of Lancashire, if only by a small margin. Its near neighbour, the Old Man of Coniston is recorded as 2,634 feet high and as the county top, within a few feet of Swirl How either way. Birkett [2] and Wainwright [3] quote 2,630 feet whilst Richards [1] and the British Mountaineering Council 1:40,000 map [4] quote 2,637 feet. 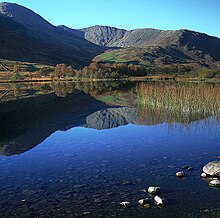 Befitting the high point of the range, Swirl How sends out ridges to the four points of the compass, each leading to further fells. Consequently, it also feeds the headwaters of four valleys.

The ridge northward to Great Carrs is named Top of Broad Slack, Broad Slack being a ferociously steep grass slope climbing out of the Greenburn valley between neighbouring crags. The ridge is a grassy plateau with a pronounced downward tilt to the west. The eastern edge is precipitous, curving around the head of Greenburn. On the journey to Great Carrs the path passes a memorial. This is the site of a wartime aircrash and bears the sad remains of a Royal Canadian Air Force Handley Page Halifax bomber. The undercarriage, together with a wooden cross and memorial cairn is on the top of the ridge with the rest of the wreckage spread down Broad Slack. It would appear that the plane approached from the west, failed to clear the ridge and tumbled down the other side. Other parts of the aircraft are preserved in the Ruskin Museum at nearby Brantwood.[1][2][3] The tilted plateau of the north ridge is triangular in plan, narrowing to a point at Fairfield in the west. This is the col between Swirl How and the ridge's western outlier, Grey Friar. To the north of this ridge are long slopes leading down to the Duddon at Wrynose Bottom.

The main ridge continues southward, stepping down Great and Little How Crags to the depression of Levers Hawse. From here it rises again to Brim Fell with Dow Crag and The Old Man of Coniston beyond. To the west of the Hawse is the valley of Tarn Head Beck, the main feeder of Seathwaite Tarn, a reservoir in a side valley of the Duddon system. This was originally a much smaller body of water, but was dammed early in the 20th century to provide drinking water for the Barrow-in-Furness area. The dam is almost 400 yards long and is concrete cored with slate buttresses, the resulting depth of the tarn being around 80 feet. Water is not abstracted directly from the tarn, but flows some distance downriver to an off-take weir.[5] To the east of Levers Hawse is Levers Water. This smaller tarn has also been raised by damming, but in this case the original user was the Coniston Copper Mines. Following the decline of mining in the late 19th century a water treatment plant was eventually built and the tarn now supplies drinking water for Coniston village.

The eastern arm of Swirl How leads down the stony slope of Prison Band to the depression at Swirl Hawse. From here it rises over the subsidiary top of Black Sails to the main summit of Wetherlam. Swirl Hawse Beck runs south from this ridge to feed Levers Water, whilst to the north of Wetherlam is Greenburn.

The summit ridge exposes welded rhyolitic tuff and lapilli-tuff of the Long Top Member, interspersed with bands of andesitic lapilli tuff of the Wetside Edge Member.[6]

The summit of Swirl How is marked by a fine cairn on a stony top, built close to the Greenburn edge of the ridge. The view to the north takes in massed ranks of fells while in other directions the Isle of Man, Morecambe Bay and Pennines can be seen.[3]

Direct ascents can be made by way of Levers Hawse to the south or Swirl Hawse to the east. Both can be gained from Coniston and Swirl Hawse is also a practicable objective from Little Langdale. The right of way shown up the western (Duddon) side of Levers Hawse does not exist as a path on the ground. Many walkers will arrive on Swirl How via one of the surrounding fells, all four ridges carrying fair paths.[1]

The origin of the name Swirl How is obscure. A Norwegian dialect word svirle means to swirl or whirl around, as in English and so this element is indecisive. "How" is believed to derive from the Old Norse word haugr meaning hill or mound, and is a common suffix in the fells of Lancashire, Westmorland and Cumberland.[7]