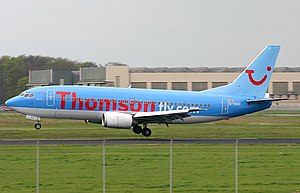 Robin Hood Airport Doncaster Sheffield is an international airport located at the former RAF Finningley station at Finningley, on the Nottinghamshire-Yorkshire border. The terminal and the northern part of the runway lie in Nottinghamshire, with the runway extening to the south into Yorkshire. The airport lies three miles south-east of Doncaster and 18 miles east of Sheffield. It handled 857,109 passengers in 2015.

The airport was initially operated by Peel Airports, a division of The Peel Group. At this time, Peel Airports also owned and managed Liverpool John Lennon Airport and City Airport Manchester. Peel Airports also owned a 75% stake in Durham Tees Valley Airport, the remaining 25% being owned by local councils in the DTVA area.[1] Doncaster Sheffield Airport has a CAA Public Use Aerodrome Licence (Number P876) that allows flights for the public transport of passengers or for flying instruction.

The airport owes its origins to military aviation, having been founded as Finningley Airfield in 1915.

During the First World War, it was used as a base by the Royal Flying Corps as they intercepted German Zeppelins targeting the industrial cities of the North. In the Second World War the airfield was used primarily for training purposes, serving as a finishing school for new crews of the larger aircraft in Bomber Command; only a few combat missions took off from Finningley. The Cold War saw the airfield's importance rise when it was used for nuclear-armed Vulcan bombers. Training once again became the priority in the 1970s and 1980s before the airport was decommissioned in 1995.

Following the ending of scheduled services from Sheffield City Airport, Finningley was reopened as Robin Hood Airport Doncaster Sheffield (DSA) in April 2005 after low-cost flights and rising passenger demand made a new commercial airport feasible.[2] The name of the airport was controversial with 11,000 people signing a petition to oppose it.[3]

The airport's first commercial flight flew to Palma de Mallorca in Majorca departing at 0915 on 28 April 2005.[4][5] The airport was projected to serve at least a million passengers during 2006. The actual figure for its first year was 899,000, making the airport the 23rd largest in the UK. By August 2007 the new airport had handled 2.28 million passengers.

Long haul flights to North America began in summer 2007, with Flyglobespan operating to Hamilton, Ontario (for Toronto), and Thomsonfly to Orlando, Cancún and Puerto Plata. All these routes have since been discontinued. In 2007 over one million passengers used the airport, however this had decreased to around 700,000 by 2012.

In December 2009, EasyJet announced that from April 2010 it would operate flights from Doncaster to Amsterdam, Barcelona, Faro, Palma de Mallorca and Prague. These flights were expected to carry 300,000 passengers in the first year of operation.[6] However, EasyJet withdrew all flights from the airport with effect from 4 January 2011.

By 2010 the Peel Group was attempting to secure outside investment for Peel Airports. In June 2010 it was announced that Vantage Airport Group (formerly Vancouver Airport Services) had agreed to buy a 65% stake in Peel Airports, with The Peel Group retaining the remaining 35%.[7] However, following a significant decline in passenger numbers,[8] Peel Airports sold Durham Tees Valley Airport back to the Peel Group in February 2012.[1] In the second half of 2012, monthly passenger numbers at Robin Hood fell significantly[9] and in December 2012 it was announced that Robin Hood would also be sold back to the Peel Group.[10] As a result, by January 2013 only Liverpool John Lennon Airport was still owned by Peel Airports, with Vantage Airport Group owning 65% of this company.[11] At Durham Tees Valley Airport and Robin Hood Airport, Vantage's involvement had ended. Robin Hood Airport was once again wholly owned by The Peel Group,[12] while at Durham Tees Valley Airport The Peel Group were majority shareholders, with local councils retaining a minority stake. In 2014, Peel took back full ownership of Liverpool John Lennon, bringing all of Peel's Airports back into group ownership, with Liverpool retaining its own management structure separate to Doncaster and Durham.

As of July 2014, Robin Hood Airport is the home of the last Boeing 727 ever to be built. It is one of two previous FedEx Express airliners that are being converted as Oil Spill Response aircraft. The aircraft belongs to T2 Aviation and has the registration of G-OSRA. It can often be found circling at a low altitude above the airport as part of their training exercises.[13] In August 2014, the second Boeing 727 aircraft, G-OSRB[14] arrived at Robin Hood Airport to also carry out flights for T2 Aviation.

In November 2015 Flybe announced they intended to base two Embraer 195s at Robin Hood Airport from March 2016 to operate flights to Amsterdam, Berlin, Paris, Jersey, Newquay, Faro, Malaga and Alicante. These services began the week of the Easter Bank holiday 2016 as scheduled. Shortly after the commencement of flights, Flybe announced the addition of Düsseldorf and Chambéry to the route map for the winter 2016/2017 season.

The airport has a single runway designated 02/20, with a length of 9,498 by 197 ft, making it longer and wider than those at many other airports in Northern England. This stems from the airport's history as a former long-range nuclear bomber base, and makes the airport suitable for wide-bodied, long-haul or cargo-carrying aircraft. The runway is long enough that the airport was designated a Space Shuttle emergency landing site. There is significant room at the airport for further passenger and cargo capacity expansion in the future. As it stands, terminal capacity is around 2.5 million passengers annually.

The passenger terminal has 24 check in desks, 6 departure gates and 3 baggage carousels. World Duty Free, WH Smith and Wetherspoons have retail areas within the terminal as well as gaming facilities. In December 2015, a Subway store opened inside the airport terminal.

Few landside facilities exist. "The Running Horse" is a pub/cafe serving passengers who have cleared security.

A Ramada Encore chain hotel opened on 10 November 2008, with a 102 bed capacity.[15] It is situated about ten minutes' walk from the Terminal building, and although the city-centre bus leaves from in front of the Terminal building and travels directly past the hotel, there is no way of boarding or alighting the bus there.

Work is also progressing on a new business park across from the terminal, which will link to the access road into the airport. In March 2014 the 24.7 acres (10.0 ha) site for the park became part of Sheffield City Region Enterprise Zone.[16]

Defence company BAE Systems formerly operated its Aircraft Maintenance Academy from No. 3 Hangar at the airport, before moving to Humberside airport. Other companies that operate within the hangars include Bespoke Training Systems Limited, Kinch Aviation Services – a facility for the maintenance of the Cessna Citation, which also includes an aircraft spray facility, and Anglo European Express (Doncaster) Ltd – onsite regulated agents for air freight and cargo operations.

The airport is home to Doncaster Sheffield Flight Training.[17]

The airport currently handles occasional one-off ad hoc freight flights, using aircraft such as the Airbus A300, McDonnell Douglas DC-10, McDonnell Douglas MD-11, Boeing 747-400 and Antonov 124. In February 2010, November 2014 and November 2015, the airport was host to the world's largest aircraft, the Antonov 225. However, while Robin Hood's previous history as RAF Finningley has left the airport with space and infrastructure in place for further development of cargo services, most air cargo in the north of England continues to pass through East Midlands Airport and Manchester Airport.

In 2014, Robin Hood Airport handled 858 tonnes of cargo, while 277,413 tonnes passed through East Midlands and 93,466 tonnes were flown to and from Manchester.[18] In 2015, this increased to 3,201 tonnes.[19] The airport is also host to a 6x weekly service by ASL Airlines France (formerly Europe Airpost) on behalf of Amazon between Robin Hood, Kassel and Wroclaw. The service is regularly operated by a Boeing 737-400 aircraft in an all-freight configuration.[20]

Between January and March 2016 alone, the airport handled over 1,000 tonnes of cargo [21] and welcomed aircraft types such as the Ilyushin-76 and Antonov 12,[22] increasingly rare at Western European airports.

In 2011, the Vulcan to the Sky Trust relocated Avro Vulcan XH558 (G-VLCN) The Spirit Of Great Britain to the airport, arriving from its former temporary winter base, RAF Lyneham, on 29 March. It was the last airworthy example of the Vulcan bomber fleet, restored to flight by the Trust in 2007. One of the reasons for the move to a commercial airport was to improve access for the public to see XH558 up close, something not possible while based at operational RAF bases. The move was deliberately not announced in advance, both to keep costs down at the not yet complete new base, and to not overshadow ongoing repatriation flights of Britain's war casualties to Lyneham from Afghanistan.[23] The airport remained XH558's home base until its final flight, a display over the airport, on 28 October 2015.[24]

With XH558 now permanently grounded, the Trust intends to remain at Robin Hood airport, and make the Vulcan the focus of a new educational and heritage facility, the first stage being to establish the Vulcan Aviation Academy & Heritage Centre. This will feature an academy building for 14-18 year olds, with the Vulcan housed in an adjacent heritage centre, where it will be maintained so as to be able to perform regular fast taxi runs, the frequency of which would be funding dependent.[25][26]

The airport is located close to the M18 motorway, a direct road link from Junction 3 of the M18 to Parrot's Corner (junction of the A638 and the B6463) was opened on the 29 February 2016. Originally part of the Finningley and Rossington Regeneration Route Scheme (FARRRS) the road is now called the Great Yorkshire Way, and is a continuation of the A6182 from Doncaster town centre. In addition the M18 has been widened to 3 lanes (from 2) from junction 2 (A1(M)) to Junction 3. Also nearby are the A1(M) motorway and the M180.

In addition, the airport lies alongside the Doncaster to Lincoln railway line, and plans for a station at Finningley to replace the station that closed in 1961 were granted planning permission in 2008. However, a 2012 report by Network Rail stated that more trains on the line would be required to make the station viable.[27]

There are regular bus services linking the airport with Doncaster, Barnsley and other surrounding areas. Currently, no direct bus connects the airport with Sheffield city centre. Public transport users must take the bus to Doncaster then switch to a Sheffield-bound train.