Rossington is a parish and former mining village in the West Riding of Yorkshire and is surrounded by countryside and the market towns of Bawtry and Tickhill.

The Great Yorkshire Way (formerly Finningley and Rossington Regeneration Route Scheme (FARRRS)) is a road running between the M18 at Junction 3 and the Robin Hood Airport, improving access primarily to the airport, Rossington and the new Doncaster iPort.[3] Work started in 2013 and the first phase of the road between M18 junction 3 and the A638 road became operational in February 2016.[4] Work on the second and final phase connecting the A638 and the airport began in June 2017[5] and was completed in June 2018.[6]

To the north-west, the village borders Loversall, with the boundary following the River Torne, passing directly next to the western edge of the former Rossington Main Colliery. It briefly crosses the M18 at the point where the motorway crosses the East Coast Main Line. At this point it meets the Borough of Doncaster and follows Mother Drain, then the River Torne, north of Torne Valley Farm. It passes by a Roman fort and crosses the A638 at Rossington Bridge, north of Rossington Bridge Farm. At Wheatcroft Farm it meets Finningley. Nearby at the junction of the A638 and B6463, there is a park and ride car park. The boundary passes along the west of Hurst Plantation, and meets the A638, a former Roman road, at Warren House Farm. Following the A638 at Mount Pleasant Hotel, it meets Austerfield. In the south-east of the parish is the Northern Racing College (for horse racing), next to Rossington Hall School. At Bawtry Forest, it meets Bawtry. Crossing the B6463 at New England Cottages, it meets Tickhill. At Stancil Bridge, it meets the River Torne and Wadworth.

There are remains of both a Roman fort and Roman pottery kilns in the area. The name Rossington translates from the old Anglo-Saxon name of 'Farm on the Moor'. In later times, Rossington housed a small village and both Rossington Hall and Shooters Hill Hall.

The area known as "Rossington" is made up of a number of villages and hamlets, namely "Hesley", "Littleworth", "Rossington", "New Rossington", Rossington Bridge and Shooters Hill. Littleworth was enlarged to a great degree in the 1970s, when Littleworth Park Estate was built. The new village began to be built around the time of the sinking of the colliery. Rossington Bridge, although now only consisting of a few buildings is the oldest of the six settlements; situated on the crossing of the Roman road from Lincoln (Lindvm) to York (Ebvrscvm) via Doncaster (Danvm) it was once the site of a major Roman fort (the largest between Lincoln and York). Rossington Bridge was also an important staging post on the Great North Road. 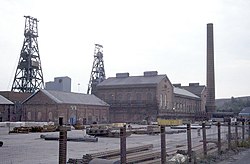 It was, however, in the mid-20th century that saw the largest expansion of the area. The pit was sunk between 1912 and 1915 The need for workers in and around the Rossington Main Colliery led to the building of large numbers of houses near to the pit in what was called New Rossington. After the end of British Coal in the early 1990s, the mine was able to keep operating and became one of the last in the area to keep producing coal albeit at a greatly reduced scale. However, with the decline of the mine, the village suffered high levels of unemployment and poverty throughout the 1990s and early 2000s. The colliery closed briefly between 1993 and 1994 before finally closing in 2007. In 2012 a coal reclamation project started on the Rossington Colliery spoil tip, this is expected to take up to 5 years to complete.

In September 2012 planning permission was given by the council to build a £100 million, 1,200-home housing development including a primary school and hotel on the colliery site.[9] Construction of houses on the site began in May 2015.[10]

The 'Old Village' and 'New Village' are separated by the East Coast Main Line. There are only two crossing points over the railway between the old and new villages: the road bridge on Stripe Road and the level crossing where West End Lane becomes Station Road. Rossington railway station was closed for regular services in 1958 but a few special trains stopped there until the late 1960s. The station buildings and platforms remained in place until the early 1980s, when the platforms, to the south of the level crossing, were dug up, and the old signal box that stood on the north east side of the crossing was demolished. A few years earlier, the signalling had been automated, and control of the crossing had moved to Doncaster PSB. When the old signal box was in operation, the crossing was controlled by a large set of wooden gates, which were operated by the signalman who had to leave the signal box and open and close the gates by hand. By the mid 1950s, these gates were opened and closed by a large wheel in the signal box. These gates were replaced by automated barriers controlled from Doncaster PSB at the same time as the signal box was closed; however, some older residents of Rossington still refer to the crossing gates. The only surviving building is the old station cottages, which stand on the north west side of the crossing and are now private dwellings. 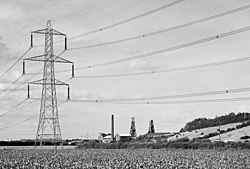 View of the colliery from Wadworth Carr, to the west of the village, and location of Doncaster Inland Port

In the first decade of the 21st century a plan was proposed for an 'eco town' of over ten thousand homes, to the south-west of Rossington, the plan was opposed by the majority of Rossington residents, and was reduced in scope by the end of the decade; a related industrial development proposed as part of the plan was a large scale intermodal rail terminal which received wider support and was given planning consent in 2011 with construction expected to take place over two years starting 2012, with continued development over eight years. The rail terminal is to be built west of the Rossington Colliery site.

Rossington Main Football Club was formed in 1919 as Rossington Colliery, originally playing behind the colliery offices in New Rossington, before moving to their current home at the end of Oxford Street in 1921. In 1998 the club merged with the latterly formed Rossington F.C. (formerly Station F.C.), and the new Rossington Main F.C. currently play in the Northern Counties East League.

Rossington is the home to the 'RASCALS' swimming team based at Rossington Sports Centre. Rossington Swimming Club was founded in June 1966.[11]

Rossington has a long history of local junior and senior cricket. Rossington Main Cricket Club. The cricket club has 3 senior teams that mixes youth and experience and these teams play on a Saturday and Sunday. The cricket club also has junior teams from the age ranges under 11s, under 13s, under 15s and under 17s.[12]