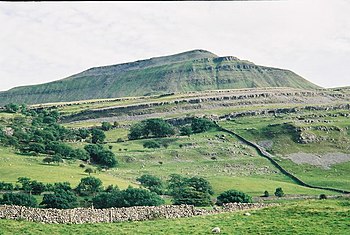 Ingleborough, the highest point of the path

A Dales High Way is a long-distance footpath in Yorkshire and Westmorland, stretching ninety miles from Saltaire in the West Riding of Yorkshire to Appleby-in-Westmorland, the county town of Westmorland. It is designed so that it runs roughly parallel to the line of the Settle–Carlisle Railway Line.

The starting point of A Dales High Way is in Saltaire, an industrial village built by the industrialist Titus Salt on 'model village' ideas beside the River Aire north of Bradford in the West Riding of Yorkshire. The town is now a World Heritage Site model.

From this southern trailhead, the route climbs up over Ilkley Moor, passing the Twelve Apostles stone circle and the Swastika Stone, and drops down to the outskirts of Addingham before rising to follow high ground south of the A65 road, including Skipton Moor. From here it descends to the town of Skipton.

From Skipton the route passes through Flasby and Hetton and crosses the inlet to Winterburn Reservoir before climbing to cross the watershed between Wharfedale and Airedale and drop to the bridge below Gordale Scar. It rises to the limestone pavement above Malham Cove, where it crosses the Pennine Way and continues across Kirkby Fell on the way to Settle.[1]

From Settle the route follows Ribblesdale to Stainforth, then goes by way of Feizor and Wharfe before heading for the summit of Ingleborough, one of the 'Yorkshire Three Peaks' and the highest point on the route at 2,375 feet.

From Ingleborough the route drops down to Chapel-le-Dale and runs below Whernside near the Ribblehead Viaduct, going alongside the railway before crossing Whernside's northern slopes to head for Dentdale. In Dentdale the Dales High Way share a route with the Dales Way through Dent. It then departs from the Dales Way and Dentdale to follow higher ground to the north to reach Sedbergh.[1]

From Sedbergh the path traverses the Howgill Fells, passing over Calders and the highest point of the Howgills, The Calf (2,218 feet), which marks the border of Westmorland.

From The Calf the route continues north into Westmorland, following the ridge over Hazelgill Knott down to cross the River Lune near Newbiggin-on-Lune. It climbs over Ravenstonedale Moor to cross the watershed into the catchment of the River Eden, dropping down to Great Asby. From here the route following the Hoff Beck, past Rutter Force and down to Hoff, before crossing a final low ridge to reach Appleby-in-Westmorland, the northern trailhead.[1]

The route is roughly parallel to the Settle and Carlisle Railway, so walkers can walk sections of the path while using the railway stations at Saltaire, Ilkley (on the line to Bradford), Skipton, Gargrave, Settle, Horton-in-Ribblesdale, Ribblehead, Dent (some five from and 400 feet above the village of that name), Garsdale (for Sedbergh), Kirkby Stephen and Appleby.[1]

At Settle and at Appleby, the route meets the circular route known as A Pennine Journey, devised in homage to a route walked by Wainwright through the Pennines, crossing it but without sharing its paths.

The path was conceived by husband and wife Tony and Chris Grogan in 2007, as a high-level alternative to the established Dales Way which runs from Ilkley to Windermere largely along Wharfedale and other valleys.[3] They published two books, a Route Guide (2008) and a Companion (2009).

The path's waymark is a circular blue and purple symbol bearing the name and web address of the path. Waymarking began in June 2012 after extensive negotiations with the four local authorities through whose areas the path passes, and was completed in 2013. Waymarks are placed where the route leaves metalled roads and at key junctions, but the route is not waymarked in open country; walkers need to use a map.[4]

Since March 2014, the route has been shown on Ordnance Survey leisure maps,[4] and it is recognised by the Long Distance Walkers Association.[2] It is described too on Bradford Council's official tourism site and the Yorkshire Dales National Park's website.[5]

An informal "Friends of A Dales High Way" group has been established.[6]