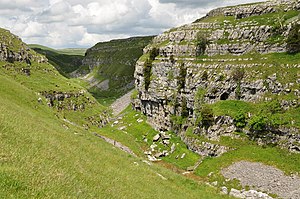 Gordale Scar is a limestone ravine, through which flows the Gordale Beck, a mile north-east of Malham, in the West Riding of Yorkshire.[1]

The scar contains two waterfalls and has overhanging limestone cliffs over 350 feet high.

It is speculated that he gorge may have been formed by water from melting glaciers or a cavern collapse.

The Gordale Beck on leaving the gorge flows over Janet's Foss before joining Malham Beck two miles downstream to form the River Aire.[2] A right of way leads up the gorge, but requires climbing approximately 10 feet of tufa at the lower waterfall.

William Wordsworth wrote in the sonnet Gordale, "let thy feet repair to Gordale chasm, terrific as the lair where the young lions couch".[3]

James Ward created a large and imaginative painting of the gorge, which can be seen in Tate Britain, named A View of Gordale, in the Manor of East Malham in Craven, Yorkshire, the Property of Lord Ribblesdale.[4]