Gargrave is a large village and parish in the West Riding of Yorkshire, located along the A65 road, four miles north-west of Skipton.

It is situated on the very edge of the Yorkshire Dales. The River Aire and the Leeds and Liverpool Canal pass through the village. It had a population of 1,764 in 2001[2] reducing slightly to 1,755 at the 2011 census.[1]

At Kirk Sink in the second century the Romans built a villa in flat meadowland near the River Aire. It was excavated in 1968–1974 by Brian Hartley. Its central room had a seven-metre square mosaic floor and a bath house was built alongside. The villa was surrounded by two ditches.[3] 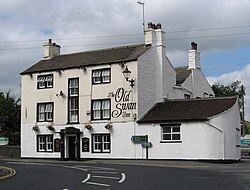 In the 1820s the main industry in Gargrave was cotton manufacturing and along the side of the canal were numerous warehouses. The population at this time was 972 and there were several public houses including the pubs named the Masons Arms and the Swan Inn.[4]

Gargrave House was built in 1917 by the distinguished Scottish architect, James Dunn. It is a Grade-II listed building.[5]

The Old Swan is also Grade II listed[6] and was named the Keighley and Craven CAMRA Pub of the Season for summer 1998.[7]

The Leeds and Liverpool Canal passes through the village and the main road is the A65 Leeds to Kendal road. There has been a long-running campaign to have a by-pass built around the village. Gargrave railway station is served by rail services to Skipton and Leeds to the east and Morecambe and Carlisle to the west. Gargrave has bus links to Skipton, Settle, Malham, Barnoldswick and Preston. 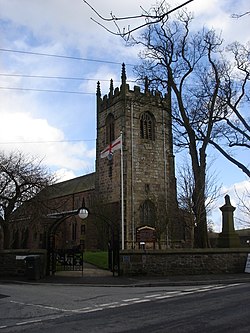 The parish church is dedicated to St Andrew was built in 1521 and restored in 1852,[8] though there is thought to have been a church on the site long before this time. Robert of Newminster who was born in the parish in about 1100 was an early rector.[9]

Former Chancellor of the Exchequer Iain Macleod is buried in the south-east corner of the churchyard. 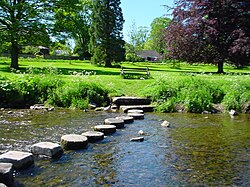 Being on the edge of the Yorkshire Dales National Park and having the Pennine Way National Trail going through the village, Gargrave is a popular destination for hikers and cyclists. Gargrave has a village hall hosting art exhibitions, tea dances, snooker, lectures, indoor bowls and pantomimes.

Gargrave AFC, the village football club, had an A and a B team playing in the Premier Division and Division 1 of the Craven League until 2016 when they withdrew from the league.[10]

The cricket club has first and second team playing in the Craven and District Cricket League.[11]

There is also a snooker club and a bowling club in the village as well as the Craven Lawn Tennis Club[12] being sited there.

Since the turn of the century there is a golf society run from the Masons Arms public house in the village.