From Wikishire
(Redirected from Ribblesdale)
Jump to: navigation, search 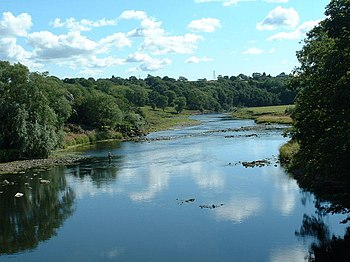 The Ribble at Ribchester

The River Ribble is a river 75 miles long which runs through the West Riding of Yorkshire and Lancashire, reaching the sea in a long, funnel-shaped estuary below Preston. At Clitheroe it forms the border between the two counties. 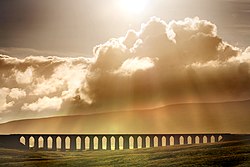 The Ribble begins at the meeting of the Gayle Beck and Cam Beck near the famous Ribblehead Viaduct at Ribblehead, in the shadow of the Yorkshire three peaks.

The river flows through Settle, Clitheroe, Ribchester and Preston, before emptying into the Irish Sea between Lytham St Annes and Southport; a length of 75 miles.

The main tributaries of the Ribble are the Hodder and Calder which join the river near Great Mitton, the River Darwen which joins at Walton-le-Dale and the River Douglas which joins near Hesketh Bank.

The Ribble Way is a long-distance footpath which follows the river for much of its course. At the time of the Domesday Book, the river formed the northern boundary of an area of land listed separately as Inter Ripam et Mersam attached to the material for Cheshire, though it was probably not formally part of the county of Chester.[1][2][3]

The river is connected to both the Leeds and Liverpool Canal and the Lancaster Canal (by the Ribble Link). The river downstream of Preston was actively dredged when Preston was an active port; this is no longer done and silt from the river is now spreading more widely over the (sand) beaches around Fairhaven and St Annes.

Its estuary forms part of the Ribble and Alt Estuaries Special Protection Area for wildlife.

The Normal Tidal Limit (NTL) of the river is at Fishwick Bottoms, between Preston and Walton-le-Dale.

The River Ribble catchment is covered by the Mersey Basin Campaign, a partnership which was established in 1985 to improve water quality and encourage waterside regeneration.

Preston City Council have published controversial plans to build a barrage across the River Ribble, in their 'Riverworks' proposals. The aim of these proposals is to build a water sports park on a section of the Ribble, coupled with over 4000 units of high quality housing and businesses in the river's flood plain. Some local residents are opposing these plans, arguing that they endanger wildlife, increase flood risk to local housing and damage greenbelt areas. These residents have set up the 'Save The Ribble' campaign. Parts of the river are a County Biological Heritage Site.

The Ribble would appear to have been known in Roman times as the Belisama,[4] possibly giving its name to Samlesbury. Ptolemy's "Belisama aest." seems to represent the estuary of the Ribble. 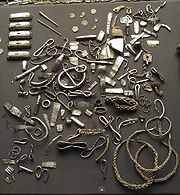 Items from the Cuerdale Hoard

The banks of the Ribble have been posited as a possible location for King Arthur's tenth battle, on the banks of a river "Tribruit", as alluded to in his Historia Brittonum by Nennius.[5]

The Cuerdale Hoard was discovered in the nineteenth century buried by the banks of the Ribble. It is the largest hoard of Norse/Danish silver ever found in the British Isles and is dated to between 903 and 910. The Hoard suggest that the Ribble was a major conduit for trade between Viking Dublin and York. The hoard is believed to have been buried at the time that Dublin was lost to the Irish and may have been brought out of Dublin to the Lancashire shore for safekeeping, never to be recovered.

Towns and villages on the Ribble

Tidal bore on the Ribble, between the River Douglas and Preston

The main tributaries of the Ribble are: