Godstone is a village in Surrey, some six miles east of Reigate.

By road, Godstone is at the junction of the A22 and A25 Brighton Road and near the M25 motorway, but it has escaped too much of the bland urbanisation which such a description may imply. The better description might be to say that the village has grown along the ancient Roman road which in later ages formed the road to Brighton, where it finds the natural route through the Caterham Gap and meets the way beneath the slope of the North Downs.

The village is within the Tandridge Hundred.

The name of Godstone is first recorded in 1248 as Godeston, suggesting an etymology of the Old English personal name Goda, and thus "Goda's estate". Thus the suggested etymology is "Goda's farm". Godgiefu, daughter of King Ethelred II, may be the origin of the name. She married firstly Drogo of Mantes, count of the Véxin and later Count Eustace II of Boulogne. Godgiefu died in 1055 and in the Domesday Book of 1086 records the manor is recorded as held by her widower, Eustace. Later records have the name as Cudeston (1153) and Codstune (1173) which might suggest "Cod's estate".

However an earlier name is known. The Domesday Book records the manor as Wachelstede.[1] A record of the name from 932 as Wuulicinsted sets Walkenstead (to modernise it) as the village's original name. Another record, undated, shows the name as Wolinstede. This suggests an origin in the Old English 'Wolcen's place, though this Wolcen, if the name is correct, is not otherwise known to history.

The heart of Godstone consists of two centres which are now conservation areas, Church Town and Godstone Green.[2]

St Nicholas Church dominates Church Town. The north aisle was built in about 1845. Sir George Gilbert Scott's restoration of the church in 1872-3 involved widening of the chancel arch, inserting a new north side to the chancel, new windows to the nave and east end, and adding the south aisle.

At the same time, Sir George Gilbert Scott designed St Mary's almshouses next to St Nicholas Church for Mrs Mabel Hunt of Wonham House, in memory of her only daughter who had died at the age of sixteen. Built in a Victorian Tudor/gothic style, they include eight self-contained houses, a wardens house and a beautiful little chapel, dedicated to St Mary. The flèch-capped chapel and the gables compose a very pretty hamlet.

Godstone Green became a busy centre of roads and vehicles during the growth of wheeled traffic in the 16th century, an era which spawned the establishment of Godstone's numerous inns. A number of houses built entirely of brick appeared in the 18th Century, notably the row in the High Street.

During the 19th Century, The Pond at Godstone Green was used as a horse-pond with a sloping bank down which the wagoners drove their horses.

In the very core of the village is a triangular island, which in Victorian times, was densely packed with a remarkable number of cottages intersected by alleys. It is claimed to have been the worst slum in Surrey, which is no longer the case, with each dwelling having been paid much care and attention.

The two parts of Godstone are linked by Bullbeggars Lane, a narrow road leading from the south of the village to the church, and the footpath running from the White Hart pub and its barn, along Bay Pond to Church Lane. The original village around St Nicholas Church was decimated during the great plague of 1342 with the victims being buried in two 'plague pits' in Bullbeggars Lane. Even in death the sexes were kept separate. Men and women were interred in separate pits. The road running past the church was at one time the main coastal road with the present village not being built until Tudor times. The Pack House featured in the Gracie Fields film 'Sing as you dance along', with Gracie dancing along the lane past the cottage which used to be an Inn.

This is a small plot of land, tucked away in between Tilburstow Hill Road and Eastbourne Road, to the south of Godstone.[3]

The name Enterdent alludes to a cluster of cottages on the land set in a wooded valley. The origin of the name the Enterdent has never been satisfactorily explained. It has previously been known as Lower and Upper Henterden, and in the 19th century, Polly Pains Bottom.

The first two dwellings appeared in 1842, and improvements began on the cottages in 1857, now number 6 and 7 The Enterdent. These buildings were enlarged with an extension at the rear and five further cottages were added, making a row of seven. A second terrace of cottages, this time eight in number, appeared further up the valley.

Today the fifteen original cottages have been converted to eight homes. The additional five cottages from the original terrace have since been converted into two larger properties, number 1 comprising three cottages, and number 5 comprising the remaining two. Numbers 6 and 7 still remain as individual cottages. At the entrance to the Enterdent, from Eastbourne Road, is a Georgian-style house, which was a tea room and a hotel from the 1920s to the 1940s. It has since been converted into two cottages, River Cottage and White Cottage.

Despite all the changes, the Enterdent has essentially remained relatively unaltered. The cottage gardens and vegetable allotments stand to this day, so too do the sandpit, the brook, the woods and the bluebells. 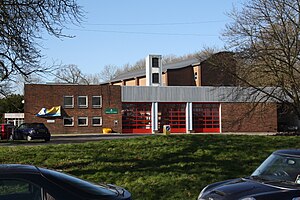 The Orpheus Trust Centre is a performing arts centre founded in 1998 by British entertainer and musician Richard Stilgoe in his former family home in the village. Godstone Farm is a popular destination for family and school outings.

Godstone Vineyards is a local wine producer selling wine from the premises on Quarry Road.

Godstone is situated at the junction of the A22 and A25 trunk roads. Junction 6 of the M25 motorway is just to the north of the village, immediately south of this junction is the town's Fire Station. Godstone is also the traffic control centre for the southern M25. Godstone railway station is situated in South Godstone (which used to be known as Lagham), approximately 2 miles to the south of the village.

Godstone is the home of Godstone Football Club, who currently play in Redhill and District division 3 having been reformed last season.