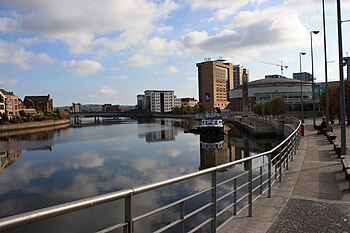 The River Lagan (Ulster Scots: Lagan Wattèr) is a major river in Northern Ireland which runs 40 miles from the Slieve Croob mountain in County Down to Belfast where it enters Belfast Lough and the sea.

The Lagan forms much of the border between County Antrim and County Down. It rises as a tiny, fast-moving stream off the Transmitter road near to the summit of Slieve Croob. From here it continues on its journey to Belfast through Dromara and Dromore. On the lower slopes of the mountain it is joined by another branch from Legananny (Cratlieve) Mountain, just opposite Slieve Croob. At Dromara, about four miles from its source, its height above the sea is 390 feet.

As the river continues on its journey to Belfast it turns east to Magheralin into a broad plain between the Antrim plateau and the plateau of Down.[1]

The river drains approximately 235 square miles of agricultural land and flows over 43 miles from the Mourne Mountains to the Stranmillis Weir, from which point on it is estuarine.[2] The river basin consists mainly of enriched agricultural grassland in the upper parts, with a lower section draining urban Belfast and Lisburn.

There is one significant tributary, the Ravernet River, and there are several minor tributaries, including the Carryduff River, the River Farset and the Blackstaff River. Water quality is generally fair though there are localised problems and occasional pollution incidents, mainly due to effluents from farms.[3]

The Lagan in Belfast 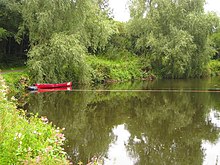 The name Belfast originates from the Irish Béal Feirste, or the mouth of the Farset, the river on which the city was built and which flows into the Lagan. Interestingly, the Farset has been superseded by the River Lagan as the most important river; the Farset now languishes under the city's High Street in obscurity.

One of the earliest and most important undertakings of the Corporation was the Lagan Weir. Completed in 1994 at a cost of £14m, the weir controls the level of water upstream. One of the main functions of the weir was to put an end to the appearance of unsightly mud flats at low tide. This was mostly successful, but mud flats are still evident on the river. The weir is a series of massive steel barriers which are raised as the tide retreats so as to keep the river at an artificially constant level. This, improvements to the sewerage system and massive dredging of the river by mechanical excavators has led to a marked improvement in water quality and the environment around the river.

Lagan Weir, dredging and aeration have increased water quality in the river and salmon returning. An otter and seals have followed the fish that now move up river to spawn in what was once an aquatic death trap.

In September 2010, dredging commenced on the river Lagan. The operation was expected to last until spring 2011 and to create 28 jobs.[4]

The Lagan in Lisburn

In a similar way to the regeneration of Belfast riverside, Lisburn City Council has embarked on a series of developments around the River Lagan. The centre-piece of this strategy has been the Lagan Valley Island complex; a new headquarters for the council and an Arts Centre, wedding and conference facilities and a restaurant. Opened in 2001 the building is surrounded by the Lagan on one side and a channel linked to the river on the other.

In the late 19th century the Lagan Navigation was built from Lough Neagh to Belfast, using some of the river as a navigable waterway and diverting water from other areas to supply separate canal sections.[3] However, by the mid-20th century the route had fallen into disuse and was largely derelict. The M1 was built across the route. Currently, the section of the navigation's towpath running from Lisburn to almost the centre of Belfast has been restored. 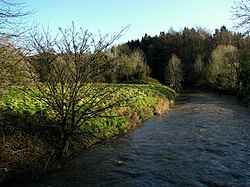 The Lagan at Newforge Lane

Atlantic salmon became extinct in the River Lagan between 1750 and 1800, coinciding with a period of major population growth, industrialisation and the construction of a navigable waterway based on the river. The latest record of a salmon population in the river dates from 1744.

From 1950 to 1990, water quality in the river improved as a result of improved sewage treatment, the Lagan Navigation was abandoned and fell into disuse, and many industrial effluents were diverted to sewer. A fish survey in the early 1970s found no fish at all in the urban reach of river through Belfast. Brown trout and several other species remained present in the upper reaches of the river throughout the worst of the downstream urban problems. The 1980s saw some recreational angling for non-migratory fish developing in the Belfast reaches of the river, and there were very occasional reports of migratory salmon or sea trout being seen in the river. In 1991, the first of a series of stockings took place and the first adult salmon returned to the Lagan in 1993.[3]

Plants such as Elodea and others have been recorded from the Lagan.[5]