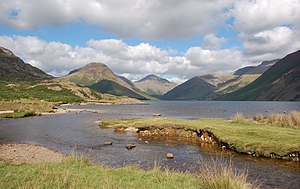 Wasdale from the shores of Wastwater

Wasdale is a valley in Cumberland in which lies Wastwater, the deepest lake in Britain outside the Highlands, at 258 feet deep, and through the nether end of the dale flows the River Irt, having emerged from the foot of the lake. The dale is in the western part of the Lake District: as the valley opens at Netherdale the fell country has ended and the river approaches the sea coast.

Wasdale is also a civil parish, though its population is minimal: fgures cannot be given accurately as from the 2011 Census it has been included in the parish of Gosforth.

Wasdale is fed by numerous rivers and burns off the fells, the largest being the Lingmell Beck. From its foot the lake is drained by the River Irt, which flows out and down the dale to join the estuary of the River Esk and the sea at Ravenglass.

The name came from the Old Norse Vatnsdalr meaning "valley of the water".

The alternative spelling "Wastdale" existed through much of the 19th century. [1][2]

The Wasdale screes, Illgill Head in the centre, Whin Rigg on the right

On the south-eastern side of the lake are very steep screes below the summits of Whin Rigg and Illgill Head which are more accessible on the far side. The head of the valley is dominated by the Great Gable and Scafell Pike, the highest peak in the Lakes, which, along with Scafell, Kirk Fell and Yewbarrow, surround the small community of Wasdale Head.

Wasdale is famous amongst rock climbers as the home of British rock climbing. A classic route is Nape's Needle on Great Gable.

At the hamlet of Wasdale Head is St Olaf's Church, one of the smallest churches in Britain.

Further down the valley are the villages of Strands and Gosforth.

Clockwise from the north-west: