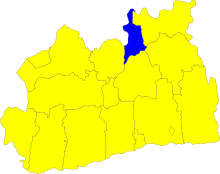 The Hundred of Kingston in Surrey

The Kingston Hundred is a hundred of Surrey, a small hundred in the north-east of the county centred on Kingston upon Thames, after which it is named. It is bounded to the north by the Thames, across which are the Middlesex hundreds of Spelthorne, Isleworth and Ossulstone. There is a small border with the hundred of Elthorne too, at New Brentford. To the east is the hundred of Brixton; to the south-east is that of Wallington; to the south is Copthorne Hundred; and to the west lies Elmbridge Hundred. It had a population of 197,619 in 2011.

The hundred has, for the most part, been absorbed by the growth of the metropolitan conurbation spreading from London and the conurbation's western border at this point approximates to that of the Kingston Hundred.

The following ancient parishes are within the Hundred of Kingston:[1]