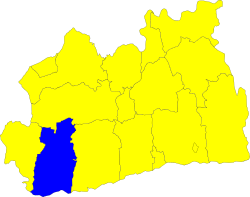 Godalming is a hundred in the south-west of the county of Surrey. It corresponds to the central third of the current borough of Waverley and some parts of the current borough of Guildford. Broadly speaking it extends from Guildown (also known as the Hog's Back) in the north to the border with Sussex in the south. Local people maintain the notion of the hundred, sometimes colloquially referred to as Godhelmia, mainly because of the predominance of north/south routes of communication through the area that have existed since ancient times. As recently as 1995 there were proposals (from Surrey County Council) to create a local government unit based on the old hundred borders.

The Hundred of Godalming was formed sometime after 825 when Wessex annexed the "south eastern provinces" of Surrey, the Sussex, Kent and Essex.

The hundred is named after the town of Godalming. Godalming takes its name from the Old English words Godhelmingas meaning "the clan of Godhelm".[1] It is supposed that Godhelm was a Saxon chieftain whose name means, approximately "good-leader". His followers first colonised this dry land, bordered by swamps and a steep valley as he and his folk moved up the valley of the River Wey. 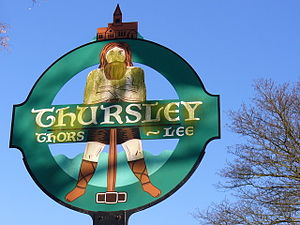 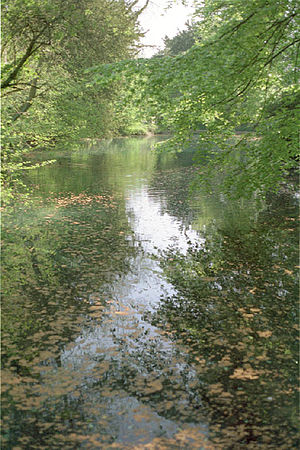 Archæological evidence indicates that the Iron Age hill fort at Hascombe had been refortified by the Romano-Britons at the end of the Roman period (c.400AD) and this would have been the main obstacle for Godhelm and his Saxons to overcome as they travelled up the Wey Valley in the early 6th century.[2] They would have fought the native Britons who would fight, and enslaved those that could neither fight nor run.[3] A British hill fort is found at the head of a valley containing the settlements of Hascombe, Thorncombe and Nurscombe. The suffix combe found in each of these names is derived from the Welsh word cŵm meaning "valley" and this may be evidence that a community of native Britons sheltered by this fort could have remained south of Godalming for some time after the Saxons first began to probe the upper reaches of Wey Valley. Initially the Godhelm Ingas would have had a quite an independent existence but the local lord (or theod) would have soon sworn fealty to a neighbouring king, be it of the South Saxons, East Saxons, West Saxons or Kentish Men depending upon the politics of the time.[4] It was not until 690 that the Godhelm Ingas were formally placed within the bounds of Surrey by treaty. Certainly the area would have been dominated by Sussex while Aelle was Bretwalda and later occupied by Wessex under the energetic Cædwalla.

Christianity is thought to have come relatively late to the Anglo-Saxon people of Surrey though the Church was established at least by 675 when an underking of Surrey named Frithuwold founded Chertsey Abbey. As such this area was one of the last in southern England to convert formally to Christianity.[5] Nevertheless, the area around Godalming has been described as "one of the most religiously dominated landscapes in England"[6] and is and was a deeply pagan place.[7]

Village names hereabouts speak of the area's pagan past: Tuesley is the Old English Tīws leah, meaning "Tiw's Meadow", after the Germanic god of war.[8] Close to this site can also be found an ancient "holy well", since the Middle Ages called Lady Well.[9] Access to both these sites is restricted by order of Ladywell Convent, a convent which still owns the surrounding land.

The nearby village of Thursley has its name from the Old English Þunres leah, meaning "Thunor's Meadow"; Thunor meaning "thunder" and the name of the ancient English equivalent of the Norse god Thor. Adjacent to this village is the appropriately named "Hammer Pond".[10][11] A local tradition is that an outcrop of sandstone on a prominence on Thursley Common was reputed "Thor’s Stone", created by a thunderbolt thrown by the god. This stone, also called the Cricklestone, now lies almost unknown since its reputation was transferred to a block of chert (alias the Pudstone) near Pudmore pond in 1896 by the popular Victorian writer Sabine Baring-Gould in his book The Broom-squire.[12]

The name of Hascombe village translates as Hægtesse combe meaning "the valley of the hag", which may once have referred to a famous witch or "wise woman". This village only a few miles south of Godalming nestles in a picturesque valley beneath the wooded remains of the Romano-British Hill fort[13]

After the Hundred formally converted to Christianity the shrines across the landscape were placed under the supervision of monks and nuns to ensure the old religion was suppressed. In some cases, the former pagan sites were sanctified as chapels as was the case in Peper Harow where there is still a small church next to the ancient tree. Tuesley was similarly sanctified and became the location of Godalming's "mother church". A small chapel existed here from the time of the conversion until the 16th Century when it finally collapsed. Since 1956 a convent has existed adjacent to this old worship site and the former 'sacred spring' which now falls within the convents grounds was at some point renamed "Lady Well", referring to the Virgin Mary.[14] The piece of rough ground adjacent to the convent where the ruins of the old chapel and the earlier shrine to Tiw are buried is still owned by the convent. A notice here specifically forbids public gatherings on the night the Winter Solstice. In the 11th Century a new parish church was built on recently drained land by the river in Godalming town. The oldest part of the Church of S.S. Peter & Paul – the Anglo-Saxon chapel – still survives today and in it can be seen an ancient stone (c.820AD) decorated with pagan carvings which is thought to have been brought down from the original 7th Century chapel at Tuesley on the hill.[15]

Godalming Hundred continues to be one of the most densely wooded parts of England and until the Middle Ages was largely covered by the Forest of Essera – a northern lobe of the ancient and vast Forest of Andred. People survived through pig farming and the making of charcoal. During the reign of King Alfred the Great a defensive burgh was built at nearby Eashing to defend the area against the Vikings in around 885. By 1086 the population of the entire hundred is thought to have been only about 600 people. Under the West Saxon local government model Godalming Hundred would have had a Hundred Reeve and a Hundred Court or "folk moot". This moot is known to have met at the site of the present day Pepperpot in the centre of the town.

In 1086 the Domesday Book stated that Godalming was owned by the King and had been a royal demesne prior to the Norman Conquest. In particular of the Hundred the Domesday book states:

In 1300 Godalming was granted the status of a town with a Town Warden and later a Mayor. The administration was based first in the Market House [8]. This was used at one time to house French prisoners during the Napoleonic Wars. The Market House was demolished in 1814 and a new building nicknamed the Pepperpot was built in its place. When elected councils assumed the task of administration, the old Hundred Court system went into abeyance and the administrative centre was moved from the Pepperpot to a new site on Bridge Street in 1908. The countryside around the town which had been part of the hundred, and other parishes once part of Farnham Hundred, became Hambledon Rural District. The Borough of Godalming was reduced in status back to simply a Town Council when the Borough of Waverley was created in 1974.

There is much to remind a resident of the past in Godalming, but one of the most apparent is the Annual Town Meeting. On this day the Mayor leads the town councillors in procession down the High Street to the site of the old Hundred Court at the Pepperpot. The councillors on this one occasion wear distinctive long grey robes. This is now the only vestige of the tribal gatherings of Godhelm's people at the very beginnings of the town's long history.