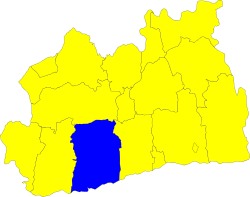 The Hundred of Blackheath in Surrey

The ancient parishes in Blackheath Hundred are:[1][2]

The Hundred Court meeting place was on the River Wey at a place called Perry Bridge, or La Perie at the western edge of Shalford. The jurisdiction of the court was much curtailed by private rights. In 1086 Odo, Earl of Kent (and Bishop of Bayeux) held Bramley, its central area. The Victoria County History attributes its conflation with Bramley to its stated size of 6½ hides of land, versus 97 stated to exist before the Norman Conquest in the same 'Domesday Book' survey document. The manorial lords of Bramley, Shalford, Wintershull, and Gomshall, and the rectors of Shalford and Cranleigh also had courts leet, and the lord of Albury view of frankpledge, but the latter gave those profits to the Crown. The lord of Shere claimed view of frankpledge up to 1238, the lord of Albury claimed the same, and it was granted to Bramley by charter of Henry III. These townships paid an annual fine to the sheriff. In 1671 Shere paid the most, at 20 shillings. The royal rights, such as they were, were granted by James VI and I in 1620 to Sir Edward Zouche of Woking Palace, and to the heirs male of Sir Alan his uncle, together with the very large manor of Woking (the main asset), Woking Hundred and other lands, to be held by the service of bringing in the first dish to the king's table on St James's Day and paying annually £100.