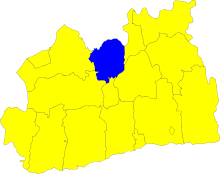 The Hundred of Elmbridge in Surrey

The name of the hundred refers to a bridge over the River Mole, which was originally called the River Emel or Amele, a word possibly meaning 'misty' and later had the alternate form Emlyn; the bridge may have been between Hersham and Esher (close to the modern bridge bearing the A244 Hersham road).

Elmbridge appears in the Domesday Book of 1086 as Amelebrige. In a Subsidy Roll of about 1334 the area was valued at £24 0s. 6d, although it is not clear if this was a collective tax demand figure of the manors of the hundred.[1]

The ancient parishes within the hundred are:

At times bundled in with it were: