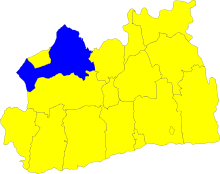 The Hundred of Godley in Surrey

Godley is a hundred of Surrey, in the north-west of the county. It is bordered to the north for the most part by Berkshire, although it has a small border with Buckinghamshire at the northernmost point. To the east lies Elmbridge Hundred; and to the south lies the hundred of Woking. The parish of Windlesham forms a detached part of that hundred too. Godley Hundred had a population of 191,827 in 2011.

A great part of the hundred was owned by Chertsey Abbey in the Middle Ages: Egham, Thorpe, Chertsey and Chobham are all mentioned in the Chertsey Abbey charter of AD 673 due to a donation by Frithuwold underking of Surrey. Much of the hundred is heathland, the greater villages and later towns growing on the fertile alluvial soil bordering the River Thames.

Godley appears in Domesday Book of 1086 as Godelie. Its manors are given as Chobham, Egham, Thorpe, Chertsey, Pyrford and Byfleet. Pyrford, though within the Godley hundred was, unusually, in the Woking parish, most of which belongs to the Woking Hundred.[1] Additionally, the ancient parishes of Horsell and Bisley and township of Frimley form part of the hundred.