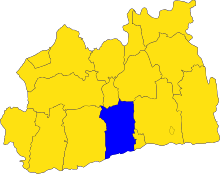 The Hundred of Wotton in Surrey

The Wotton Hundred or Dorking Hundred is a hundred of Surrey.

The hundred comprises a south-central portion of the county, and includes the ancient parishes of Abinger, Capel, Dorking, Ockley and Wotton.

The area's owner initially had pecuniary rights (to incomes) over parts of parishes on the borders of the area and just beyond, from just north of Guildford to Sussex. The site of the Hundred Court is indicated in the later mediæval records as Dorking, hence its latter alternative name.[1]

What vestiges of rights to minor rents and other such rights in the hundred still remained in the 17th century were granted to Sir Edward Zouche in 1620 by James I, and later passed to the Earls of Onslow, heirs to the estates of the Earls of Surrey.[1]

Subsequent large village-size settlements within this area include the three Holmwoods collectively and Holmbury St Mary.[1] The majority of the hundred today is farmland or woodland, and is in the Metropolitan Green Belt. The largest town in the hundred is Dorking.