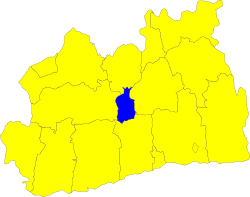 The Hundred or Half-Hundred of Effingham in Surrey

The Effingham Hundred or Effingham Half-Hundred is a hundred of Surrey, ambiguous as to whether it be treated as a hundred in its own right or as a half-hundred, and if the latter then grouped with Copthorne Hundred to the east and north-east. Effingham on its own terms is the smallest hundred in Surrey, in both area and population, the latter being 13,544 in 2011.

The Half-Hundred is in the centre of the county and comprises the ancient parishes of:

From a date before the Tudor period Effingham was connected with Copthorne Hundred, and so was styled and treated as the Half-hundred of Effingham.[1] It contains the smallest amount of land in Surrey, at 47 to 50 hides.[2]

In the Domesday Book of 1086, Effingham Hundred included the above and two unknown settlements of Driteham and Pechingeorde.[2]

It was a royal hundred, and in a document of the reign of Edward I is stated to have been farmed by all its various owners altogether formerly for half a mark per annum, but then for 10 shillings.

In minor civil dispute settlement, in 1628 the Borough of Kingston received a grant of jurisdiction within the "hundred of Copthorne and Effingham" in compensation for their loss of the privilege of court leet in Richmond and Petersham and this grant was confirmed by Charles I to in 1638, and as the last vestige of the hundred's influence held good until late 19th century reform of municipal corporations.