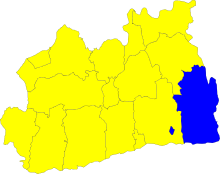 The Hundred of Tandridge in Surrey

Tandridge is a hundred of Surrey, in the very south-east of the county, bordering Kent and Sussex. To the north is the Wallington Hundred of Surrey and to the west the Reigate Hundred. It is named after the village of Tandridge, where anciently the Hundred Moot gathered.

The ancient parishes of the hundred are recorded as:[1]

The hundred has remained unchanged since the Domesday Book of 1086 where it was called Tenrige. Approximately one sixth of all the serfs in Surrey belonged to manors in the Tandridge hundred before the abolition of that social status across the country in the early Middle Ages.[2]

Custody of the hundred was granted to Thomas Hunt in the reign of King James I.