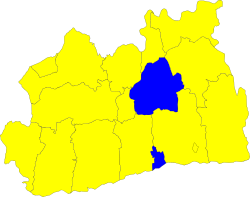 The Hundred of Copthorne in Surrey

In the Domesday Book, the settlements of Ashtead, Fetcham and Mickleham were included in the Wallington Hundred, which the line of county historians cited by the Victoria County History of 1911 who have examined the Patent Rolls and similar state collections of deeds, royal letters and documents, such as Owen Manning and John Aubrey agree was by mistake.[2]

Copthorne was a royal hundred (to the extent its overarching overlordship affected the manors and common land), and remained in the hands of the Crown, though James I of England leased it for 21 years to Thomas Jenkins in 1617. In a subsidy roll of the 14th century it was said to be worth £47 15s. 6¼d. and with Effingham Half-Hundred the various land units within it were assessed in total for ship money at £136 16s. 4d. at the third such levy in 1636.