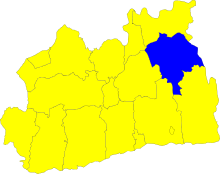 The Hundred of Wallington in Surrey

Wallington is a hundred of Surrey, in the north-east of the county. The majority of its area is now within the metropolitan conurbation. It is the second-most populous of the hundreds after Brixton, with a population of 656,760 in 2011.

The hundred contains the ancient parishes of:[1]

In Surrey it is bounded by the hundreds of Brixton to the north, Kingston and Copthorne to the west, Reigate and Tandridge to the south. In the east its boundary is with the Bromley and Beckenham and Ruxley Hundreds of Kent.