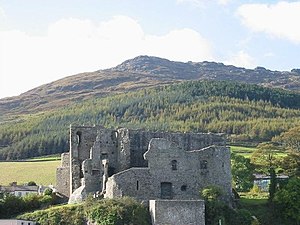 The Cooley Peninsula is a hilly peninsula in County Louth, between Carlingford Lough (the border with the United Kingdom) to the north, and Dundalk Bay to the south. On the peninsula are such villages as Omeath, Carlingford and Greenore.

The name of the place is from the Irish language, in whih it is known as today as Cuaille,[1] but the older form, Cúalṅge[2] is famed from the ancient epic of the Ulster Cycle known as the Táin Bó Cúailnge; the "Cattle Raid of Cooley".

The peninsula contains the Cooley Mountains, the highest of which, Slieve Foy, is also the highest peak in County Louth at 1,932 feet. To the north is Carlingford Lough and the border with County Down; to the south is Dundalk Bay. The peninsula is ringed by the R173 regional road.

In Irish mythology Cooley (known in Old Irish as Cúalnge, was the home of the bull Donn Cuailnge, and the site of the Táin Bó Cúailnge; the Cattle Raid of Cooley.

Ancient monuments in Cooley include the Proleek Dolmen,[3] whose capstone weighs an estimated 35 tons (and a Bronze Age gallery grave, both near Ballymascanlan.