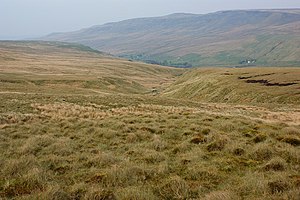 Mallerstang Common is an open moorland at the head of the upper Eden Valley in Westmorland.[1] It lies across both sides of the dale, about six miles long up the day south of Kirkby Stephen: the slopes climbs from the east side of the river up to the watershed of the Pennines, which marks the border with Yorkshire, and west of it up to the crags of Wild Boar Fell. The common has since August 2016 been within the statutory bounds of the Yorkshire Dales National Park, the known additions being informally known as the 'Westmorland Dales'.

Here the River Eden is a young river in a narrow valley. Wild Boar Fell and Swarth Fell stand to the west, with Mallerstang Edge to the east. 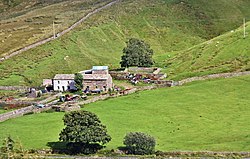 The highest point of Mallerstang Edge is the summit of High Seat on the county border at 2,326 feet, which is about three feet higher than the more prominent Wild Boar Fell on the opposite side. The other main high points on the eastern side of the dale are the curiously named Gregory Chapel, south of High Seat, and Hugh Seat to the south-east, also on the county border.

Mallerstang, like many other Pennine dales, reflects the pattern set a thousand years ago by its Norse settlers (whose language is still evident in the names of many of its geographical features).[2] Its small community is scattered along the 10 kilometres of the dale in a series of isolated houses and small hamlets, with no village.

One of the notable early Lords of the Manor was Sir Hugh de Morville, Lord of Westmorland. He was one of the four knights who murdered St Thomas Beckett in Canterbury cathedral, and legend says that he took refuge here afterwards before being banished to France. (Hugh Seat is named after him, and Wild Boar Fell, as seen from beyond the castle to the north, is said to have haunted him because in certain lights its profile strongly suggests a face and mitre: the recumbent St Thomas.)

The dale within Mallerstang Common is closely associated with Lady Anne Clifford, and the ancient road to the east of the river is known as "Lady Anne's Highway" in memory of the indomitable Countess of Pembroke, who often travelled along this track while moving between her many castles, though it is an ancient way, known to the Romans, who used it to cross between Wensleydale and their forts along what is now the A66. A local shepherd found a hoard of Roman coins on Mallerstang Edge near the Highway in 1927. (The "Mallerstang hoard"[3] is now in the Tully House Museum in Carlisle.) Lady Anne built a cairn, known as Lady Anne's Pillar, on Hugh Seat in memory of her predecessor, Sir Hugh De Morville. 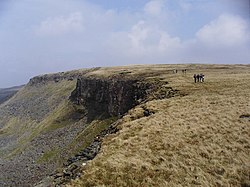 Pendragon Castle, was also restored (in fact more or less rebuilt) by Lady Anne in 1660. According to legend it is supposed to have been built by Uther Pendragon, father of King Arthur. Whether there is any substance to these old legends will probably never be settled, and there is no evidence from the limited archaeological investigations for any building here before the Norman castle built in the reign of King William Rufus. The castle was one of Lady Anne Clifford's favourite places. But her heir, the Earl of Thanet, abandoned it; and over the next three centuries it gradually deteriorated to the sad but beautiful and atmospheric ruin that we see today.[4]

The most conspicuous structure in the dale is the Settle–Carlisle Railway, built between 1869 and 1876, and one of the last great engineering works in Britain to be built almost entirely by muscle power. It was constructed at great cost not only of money but also of human life. Twenty-five of those who died during the construction of this section of the line (both builders and members of their families) are buried in unmarked graves in the churchyard of St. Mary's. A memorial to them was erected there in 1997.[5]