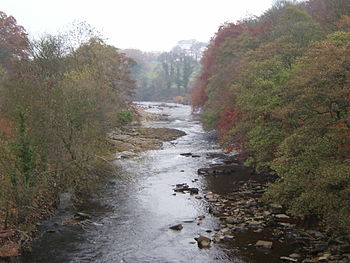 The River Swale rises above Great Shunner Fell in the Pennines close by the very edge of Yorkshire as it abuts Westmorland and flows south and east through the North Riding of Yorkshire, creating Swaledale, one of Yorkshire's famously beautiful dales.

The Swale joins the River Ure below Myton-on-Swale, that river becoming the River Ouse soon after and flowing south to York and eventually emptying into the Humber and the North Sea

The River Swale is reputed to be the fastest river in England, and the name Swale is derived from Old English meaning "swilling" or "fast flowing". The river is prone to flash flooding, any many unsuspecting swimmers casting themselves into its clutches in a wetter seasons have been swept to their deaths over the years due to heavy rainfall in upper Swaledale.

The Swale begins its course high in the mountains a few miles south east of Kirkby Stephen and not far from the source of the River Eden, which flows northward through Westmorland and Cumberland to Carlisle. The river is first given its name only a few miles downstream from the source, at the confluence of the Birkdale Beck and the Great Sleddale Beck. After crossing the Pennine Way near the hamlet of Keld it cascades over a series of waterfalls including Wain Wath Force and Kisdon Force, before swinging eastwards at the village of Muker and carving out the limestone cliffs of picturesque Swaledale

Swaledale is picturesque green valley which has given its name to a cheese and a breed of hard sheep, and which is noted for its villages, farms and hills. Here the river is broad and swift.

The Swale beats its way over several more waterfalls in Swaledale, passing Richmond below Richmond Castle and dropping over its last large waterfalls in the form of Richmond Falls heading down to Catterick. Turning south through the Vale of Mowbray the Swale is joined by the River Wiske from Northallerton and Cod Beck from Thirsk before reaching the Ure just east of Boroughbridge at a point known as Swale Nab. 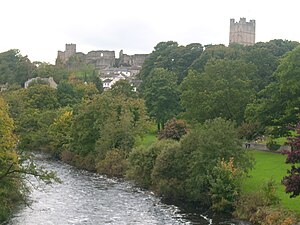 The River Swale from a bridge in Richmond