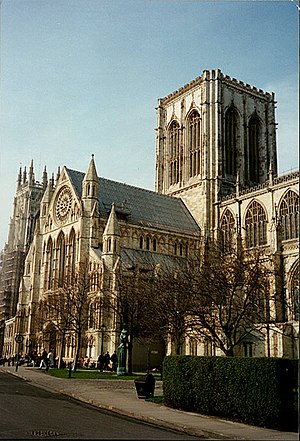 The Archbishop of York acts also as the diocesan bishop of the Diocese of York. His seat is York Minster, formally known as The Cathedral and Metropolitical Church of St Peter in York.

The province was created in 735 when Ecgbert Bishop of York was raised to the status of Archbishop. At one time, the Archbishops of York also claimed metropolitan authority over Scotland but these claims were disputed by the Scottish bishops in the Middle Ages and the claim ceased when the office of Archbishop of St Andrews was established to oversee the bishops of Scotland. 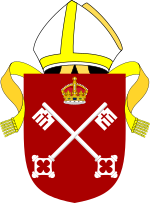 The twelve dioceses overseen by the Province are:

There was a bishop in York from very early Christian times. Bishops of York were present at the Councils of Arles and Nicaea. However, this early Christian community was later destroyed by the pagan English and there is no direct succession from these bishops to the post-Augustinian ones.

The diocese is said to have been refounded by Paulinus, a member of Augustine's mission, in the 7th century. Notable among these early bishops is Wilfrid. These early bishops of York acted as diocesan bishops under Canterbury until the time of Ecgbert of York, who was elevated to become an Archbishop in 735 and established metropolitan rights in the north. Until the Danish invasion the archbishops of Canterbury occasionally exercised authority, and it was not till the Norman Conquest that the archbishops of York asserted their complete independence.

In the later Anglo-Saxon period it became usual for the See of York to be held in plurality with the Worcester, and sometimes Lichfield, and Lincoln, since the Norsemen had mae such depredations upon the estates formerly held by the Archbishops in earlier ages that they did not have sufficient income to maintain the Archbishop and his court in a proper state,

The dioceses in the Northern Isles and in Scotland were taken from York in 1072. In 1154 the suffragan sees of the Isle of Man and Orkney were transferred to the Norwegian archbishop of Nidaros (today's Trondheim), and in 1188 all the Scottish dioceses except Whithorn were released from subjection to York, so that only the dioceses of Whithorn, Durham and Carlisle remained to the Province. Of these, Durham was practically independent, for the palatine bishops of that see were little short of sovereigns in their own jurisdiction.

Several of the archbishops of York held the ministerial office of Lord Chancellor of England and played some parts in affairs of state. As Peter Heylyn (1600–1662) wrote: "This see has yielded to the Church eight saints, to the Church of Rome three cardinals, to the realm of England twelve Lord Chancellors and two Lord Treasurers, and to the north of England two Lord Presidents." The bishopric's role was also complicated by continued conflict over primacy with the see of Canterbury.

At the time of the English Reformation, York possessed three suffragan sees, Durham, Carlisle and Sodor and Man and the new Diocese of Chester, founded by Henry VIII. At this time many of the secular rights belonging to the Archbishop were removed, though the Bishop of Durham's remarkable palatine jurisdiction remained for centuries.

Walter de Grey purchased York Place in London, which after the fall of Cardinal Thomas Wolsey, was renamed the Palace of Whitehall.

Industrial Revolution and after

The Industrial Revolution vastly increased the populations of the towns in County Durham, Lancashire and Yorkshire and the industrial centres on the Tyne in Durham and Northumberland. As a result several new dioceses were created to give today's total of fourteen.

In 2012 the Dioceses Commission decided that the number of dioceses in Yorkshire should be reduced, which decision is still (2013) being considered. 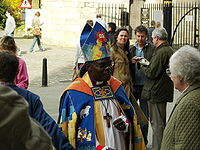 The province's metropolitan bishop is the Archbishop of York, who also bears the title “Primate of England” (while his southern colleage in Caterbury is the “Primate of All England”, a formula derived from a mediæval compromise). York is the second of the Church’s archbishops, though amongst the bishops of the church they are considered “first amongst equals”.

The archbishop's throne is in York Minster in the heart of the City of York. His official residence is Bishopthorpe Palace in the village of Bishopthorpe, outside the city.

The Archbishop signs as Ebor., from the Latin name of York; Eboracum. (The current archbishop, John Sentamu signs not as "+John Ebor" but as as +Sentamu Ebor: since both "John" and "Sentamu" are Christian names.)

Archbishops from the Reformation

The Bishop of Beverley is the Provincial Episcopal Visitor in the Province, popularly known as a "flying bishop". It is his role to minister to parishes which reject the ordination of wonen as priests.

Story, Joanna (August 2012). "Bede, Willibrord and the Letters of Pope Honorius I on the Genesis of the Archbishopric of York". English Historical Review cxxvii (527): 783-818.