The Diocese of Chester is a Church of England diocese in the Province of York covering Cheshire.

The diocese was created by King Henry VIII as part of the Henrician Reformation, in 1541, and at the time of its creation it was much larger, encompassing Lancashire also and parts of Cumberland, Flintshire, Westmorland and Yorkshire. The Victorian church reorganisations created new dioceses in the industrial areas, cutting Chester down to its home county. 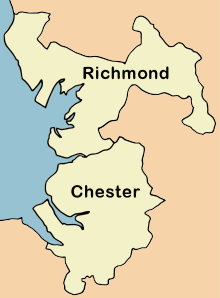 The Diocese of Chester when created in 1541 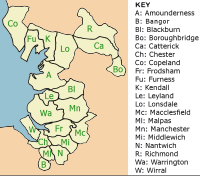 The deaneries of the Diocese of Chester in 1835 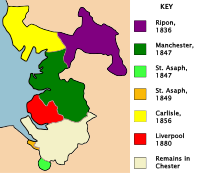 Map showing the areas loost to the Diocese of Chester

Before the sixteenth century the city possessed a bishop and a cathedral, though only intermittently. Even before the Norman Conquest the title "Bishop of Chester" is found in documents applied to prelates who would be more correctly described as Bishop of Mercia, or Bishop of Lichfield. After the Council of London in 1075 had decreed the transfer of all episcopal chairs to cities, Peter, Bishop of Lichfield, removed his seat from Lichfield to Chester, and became known as Bishop of Chester. There he chose The Collegiate Church of St John the Baptist as his cathedral. The next bishop, however, transferred the see to Coventry on account of the rich monastery there, though he retained the episcopal palace at Chester. The Diocese of Coventry and Lichfield was of enormous extent, and it was probably found convenient to have something analogous to a cathedral at Chester, even though the cathedra itself were elsewhere; accordingly the church of St John ranked as a cathedral for a considerable time, and had its own dean and chapter of secular canons down to the time of the Reformation.

The chief ecclesiastical foundation in Chester was the Benedictine monastery of St Werburgh, the great church of which finally became the Cathedral Church of Christ and the Blessed Virgin Mary. The site had been occupied even during the Christian period of the Roman occupation by a church dedicated to Saints Peter and Paul, and rededicated to St Werburgh and St Oswald during the Saxon period. The church was served by a small chapter of secular canons until 1093, when Hugh Lupus, Earl of Chester, converted it into a major Benedictine monastery, in which foundation he had the co-operation of St Anselm, then Prior of Bec, who sent Richard, one of his monks, to be the first abbot. A new Norman church was built by him and his successors. The monastery, though suffering loss of property both by the depredations of the Welsh and the inroads of the sea, prospered, and in the thirteenth, fourteenth, and fifteenth centuries the monks transformed their Norman church into a gothic building which, though not be reckoned among the greatest cathedrals of England, yet is not unworthy of its rank, and affords a valuable study in the evolution of Gothic architecture. It has been said of it that "at every turn it is satisfying in small particulars and disappointing in great features". The last of the abbots was John, or Thomas, Clark, who resigned his abbey, valued at £1,003 5s. 11d. per annum, to the king.

The Diocese of Chester was created, during the Henrician Reformation, on 14 August 1541,[1] from the Chester archdeaconry of the Diocese of Lichfield and Coventry. On its creation, it covered Cheshire and Lancashire, and the Richmond Archdeaconry of the Diocese of York.[2] The diocese was originally formed as part of the Province of Canterbury, but was quickly transferred to the Province of York later in the same year.[2] The twenty deaneries of the new diocese were: Amounderness, Bangor, Blackburn, Boroughbridge, Catterick, Chester, Copeland, Frodsham, Furness, Kendal, Leyland, Lonsdale, Macclesfield, Malpas, Manchester, Middlewich, Nantwich, Richmond, Warrington, and Wirral. The deaneries as shown in the accompanying map, were established by 1224 and remained largely unchanged until the nineteenth century.[3]

The Bishop of Chester is assisted by two suffragan bishops, the Bishop of Birkenhead and the Bishop of Stockport.[12] The suffragan See of Stockport was created in 1949 and was the sole suffragan bishopric in the diocese until the See of Birkenhead was created in 1965. Since 1994 the Bishop of Beverley (currently the Right Reverend Glyn Webster, consecrated in 2013) has provided "alternative episcopal oversight" in this diocese (among eleven others in the Province of York) to those parishes which cannot in conscience accept the sacramental ministry of bishops who have participated in the ordination of women.

The diocesan Bishop of Chester is supported by two suffragan bishops, the Bishop of Birkenhead and the Bishop of Stockport. There are five retired honorary assistant bishops licensed in the diocese.

Excluding early mediæval bishops who may have been referred to as 'Bishop of Chester', the bishops of the diocese have been: