Diocese of Gibraltar in Europe

The Diocese of Gibraltar in Europe, also called simply the Diocese in Europe, is geographically the largest diocese of the Church of England and arguably the largest diocese in the Anglican Communion, covering some one-sixth of the Earth's landmass, including Gibraltar and all Europe, Morocco, Iceland, Turkey and the territory of the former Soviet Union. It is part of the Province of Canterbury.

The cathedral is the Cathedral of the Holy Trinity, Gibraltar.

The Bishop of Gibraltar in Europe is assisted by the Suffragan Bishop in Europe. Although the Cathedral is in Gibraltar and there the Bishop is enthroned, the Bishop's residence far from his seat: until 2014 he dwelt at Bishop's Lodge in Worth in Sussex, so as to place him close to Gatwick Airport (just to the north in Surrey) for ease of travel across Europe. In 2014 the bishop was displaced to live in Brussels in Belgium, while the diocesan offices were moved to London.

There are two pro-cathedrals for the diocese; St Paul's Cathedral in Valletta, Malta, and the Pro-Cathedral of the Holy Trinity in Brussels, Belgium.

The Diocese of Gibraltar was created on 29 September 1842[1][2] and at that time covered all Anglican chaplaincies from Portugal to the Caspian Sea. On 30 June 1980,[3] the diocese was amalgamated with the Jurisdiction of North and Central Europe (exercised by the Bishop of London) and renamed the Diocese of Gibraltar in Europe.

The Diocese is divided into seven archdeaconries:

Bishops of Gibraltar in Europe

The bishop's official residence was formerly in Gibraltar, but today in Brussels, in Belgium. 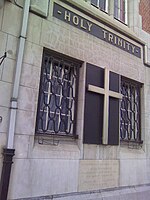 Pro-Cathedral of the Holy Trinity, Brussels