The Diocese of Chelmsford is a Church of England diocese, part of the Province of Canterbury. The diocese covers Essex, a county with a population of nearly three million souls.

The diocese is divided into three episcopal areas, each with its own suffragan bishop.

The Diocese was created on 23 January 1914,[1] covering the entire county of Essex, which had previously been part of the Diocese of St Albans.[2]

The Cathedral, though an impressive building, was built as a parish church and was known as St Mary The Virgin. It only became a cathedral when the Diocese was created in 1914. The church on this site was probably built along with the town eight hundred years ago, and was rebuilt in the 15th and early 16th centuries, with walls of flint rubble, stone and brick. 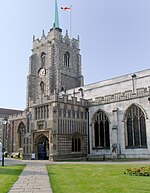 There is also a tower with a spire and a ring of thirteen bells, twelve of which were cast by John Warner & Sons at Cripplegate. The nave partially collapsed in 1800, and was rebuilt by the County architect John Johnson, retaining the Perpendicular design, but using Coade stone piers and tracery, and a plaster ceiling. The upper part of the chancel was rebuilt in 1878.

The south porch of the Cathedral was extended in 1953 to mark Anglo-American friendship after the Second World War and the many US airmen stationed in Essex during the war.

Until 1954, the cathedral was the Cathdral Church of St Mary The Virgin, but in that year received an additional dedicatation to Saints Peter and Cedd.

The cathedral celebrates its links with Thomas Hooker, who was Chelmsford Town Lecturer between 1626 and 1629. He fled to the New World because of his Puritan views and founded the town of Hartford, Connecticut and was one of the founders of American democracy.