The Diocese of Llandaff is a Church in Wales diocese, headed by the Bishop of Llandaff, whose seat is located at the Cathedral Church of Saint Peter and Saint Paul in Llandaff, a suburb of Cardiff. The diocese today covers most of Glamorgan, but once it stretched from the River Towy to the middle of the Wye Valley.

The diocese was reputedly founded in 560 or earlier by Saint Teilo, during the monastic movement initiated by Saint Dubricius who presided over several monasteries in Ergyng, including Hentland and Moccas. Dubricius is said to have made Teilo abbot of this daughter monastery at Llandaff, which after Dubricius' death became a monastic cathedral. Saint Dubricius is usually given as the first bishop. 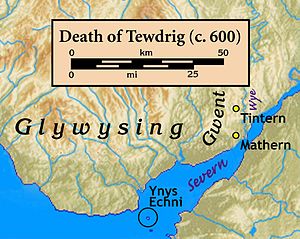 Places mentioned in the 'Book of Llandaff'

The early history of diocese is controversial, because the chief authority, the diocesan charters in the Book of Llandaff, though dating from the late 6th century, were considerably doctored to raise Llandaff's profile when they were copied in the early 12th century. Similarly, the saints' 'lives' therein have little basis in fact. Gilbert Hunter Doble and others have clearly demonstrated that there is no evidence that Saints Dubricius and Teilo had anything to do with Llandaff. Dubricius was only active in Ergyng and Gwent, while Teilo's associations with Llandaff have been transferred from his great abbey at Llandeilo Fawr.

The original church at Llandaff (perhaps a monastery) may well have been an early foundation. However, it is likely to have been founded by Saint Oudoceus rather than Saint Teilo. The early episcopal authority in the area was, indeed, in Ergyng and Gwent, originally under Dubricius and then his disciples. Their base may have been at Welsh Bicknor, Kenderchurch or Glasbury. Teilo's foundation at Llandeilo may have superseded Ergyng in the mid-7th century or, as David Nash Ford suggests, the two may have remained the seats of independent, yet parallel, bishoprics, as late as the mid-9th century. Both had accepted Roman practices in 777.

There certainly seems to have only been a single diocese by the late 9th century, based at Llandeilo. The Bishops were known as 'Bishop of Teilo'. When exactly the bishop's cathedra (and the Teilo traditions) moved to Llandaff, however, is not clear. Ford, again, suggests a date not much later, after the death of Bishop Nobis in 874. However, a date in the early 11th century or even later cannot be ruled out. The bishops of Llandaff long maintained absolute independence within their own territories, and the rights and privileges of the Church of Llandaff were extensive. However, there is a tradition that by 872, the bishops had already, nominally at least, accepted the authority of the Province of Canterbury. Certainly this was the case by 982. The first English bishop, Wulfrith, had been installed in 930, though he may have been of dual-nationality.

After the Norman Conquest of south-east Wales in the 1090s, the Archbishops of Canterbury began to exercised their jurisdiction over Wales, and Anselm placed Bishop Herewald of Llandaff under interdict. Herewald's successor, Urban, was consecrated at Canterbury, after taking an oath of canonical obedience to the archbishop, and from that time Llandaff became a full dependent of Canterbury. A standing difficulty was the admixture of race and language due to the English settlements, also to the ignorance and incontinence of the Welsh clergy, who had ceased to observe celibacy and gave scandal to the Normans and English alike. A reform was gradually effected, chiefly by the establishment of new monasteries and mendicant houses. The Book of Llandaff, now at the National Library of Wales, Aberystwyth reflects Urban's territorial ambitions for his diocese. The present cathedral dates substantially his time, 1120 plus.

In the religious turmoil of the 16th century, the Bishop of Llandaff, Anthony Kitchin, was the only Bishop in office at the accession of Elizabeth I who acquiesced in the religious changes and was accounted an apostate by Romanists. He died in 1563.

Thereafter, there continued a line of Anglican bishops up to the present day. Some of the earlier ordinaries showed aptitude for the conditions of the post, for example Blethyn and Morgan (the translator of the Bible), also those appointed under Charles II. Another Morgan suffered many years imprisonment for his Laudian convictions. The administration of the diocese suffered from its poor endowment and limited patronage, leading at the end of the eighteenth century to non-resident bishops and the holding with other ecclesiastical benefices (such as the Deanery of St. Paul's).

Bishop Ollivant notably took up the challenge of providing churches for the newly industrialised valleys. The population explosion created pressure for the division of the diocese, which was put into effect after disestablishment. The diocese remained part of the Province of Canterbury until the creation of the Church in Wales on 31 March 1920.

From the Elizabethan Reformation to disestablishment