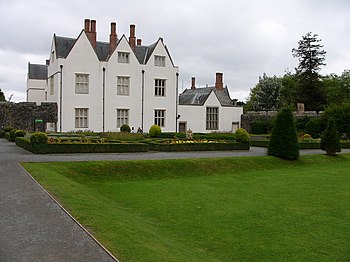 St Fagans National Museum of History (Welsh: Sain Ffagan: Amgueddfa Werin Cymru) is an extensive open-air museum, spread over a hundred acres, by the village of St Fagans in Glamorgan, to the west of Cardiff.

The museum chronicles the historical lifestyle, culture, and architecture of the Welsh people. The museum is part of the wider network of 'Amgueddfa Cymru – National Museum Wales'.[1]

It consists of more than forty re-erected buildings from every county in Wales, and is set in the grounds of St Fagans Castle, a Grade-I-listed Elizabethan manor house.[2] In 2011 Which? magazine named the museum the United Kingdom's favourite visitor attraction.[3]

The museum covers an estate of a hundred acres, which was the estate of St Fagans Castle. It is to be found at St Fagans, just outside the urban edge of Cardiff, four miles west of the city centre.

The museum was started in 1946 following the donation of the castle and lands by the Earl of Plymouth.[5] It opened its doors to the public in 1948, under the name of the Welsh Folk Museum. The museum's name in Welsh (also meaning "Welsh Folk Museum") has remained unchanged since that date, whereas the English title was revised to Museum of Welsh Life, thereafter St Fagans National History Museum, and again to its current title.[1][6]

The brainchild of Iorwerth Peate, the museum was modelled on Skansen, the outdoor museum of vernacular Swedish architecture in Stockholm. Most structures re-erected in Skansen were built of wood and are thus easily taken apart and reassembled, but a comparable museum in Wales was going to be more ambitious, as much of the vernacular architecture of Wales is made of masonry.[2][5]

A redeveloped main reception building was opened in July 2017.[7] The six-year £30m redevelopment of the site, which was funded by a number of sources, notably the taxpayers' money and the National Lottery money, was completed in October 2018.[8][9]

In June 2019, St Fagans was named the United Kingdom’s Museum of the Year 2019 by the Art Fund, which cited the facility's "exceptional imagination, innovation and achievement".[12] The Art Fund is a charity which helps to support museums and galleries.[13] 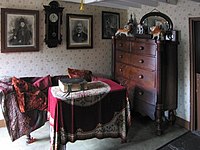 The museum includes more than forty buildings which represent the architecture of Wales,[5] including a nonconformist chapel (in this case, Unitarian),[14] a village schoolhouse, a toll road tollbooth, a cockpit, a pigsty (below), and a tannery.[6]

The museum holds displays of traditional crafts with a working blacksmith forge, a pottery, a weaver, miller, and clog maker. It also includes two working water mills: one flour mill and one wool mill. Part of the site includes a small working farm which concentrates on preserving local Welsh native breeds of livestock. Produce from the museum's bakery and flour mill is available for sale.[2]

The mediæval parish church of Saint Teilo, formerly at Llandeilo Tal-y-bont in west Glamorgan (restored to its pre-Reformation state), was opened in October 2007 by the Archbishop of Canterbury, Rowan Williams, and still serves as a place of worship for Christmas, Easter, and Harvest Thanksgiving.[2] A Tudor merchant's house from Haverfordwest, opened in 2012, is the latest building to be added to the museum's collection.[15] Future plans include the relocation of the historic Vulcan public house from Newtown in Cardiff.[16]

Although the museum was intended to preserve aspects of Welsh rural life, it now includes several buildings that depict the industrial working life that succeeded it, that being almost extinct in Wales. There is a row of workers' cottages, depicting furnishing from 1800 to 1985, from Rhyd-y-car near Merthyr Tydfil (below), as well as the pristine Oakdale Workmen's Institute. A post-war prefabricated bungalow represents later domestic lifestyles.[17]

From 1996 to 2012, the museum hosted the Everyman Summer Theatre Festival when it re-located from Dyffryn Gardens. This festival, which includes a Shakespeare play, a musical, and a children's show has become part of the theatrical calendar since its founding at Dyffryn in 1983.[18][19][20]

Scenes from the Doctor Who episodes "Human Nature" and "The Family of Blood" were filmed at the museum.[21][22][23]

Based on archaeological findings, a reconstruction of Llys Rhosyr, a thirteenth-century court of the princes of Gwynedd,[24][25] was completed and opened to the public in October 2018. Called Llys Llewelyn ('Llewelyn's Court'), it was opened with the intention that schoolchildren would be able to stay in the buildings overnight, from spring 2019.[26]

The Gweithdy ('Workshop'), a sustainable building designed by Feilden Clegg Bradley Studios, was first opened in July 2017;[27] a café was later added. The new gallery was opened in October 2018, housing improved facilities for visitors, supporting the study of collections and hosting demonstrations and workshops by traditional craftsmen.[7]