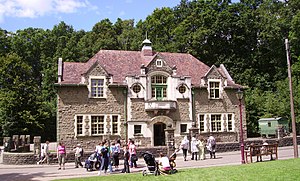 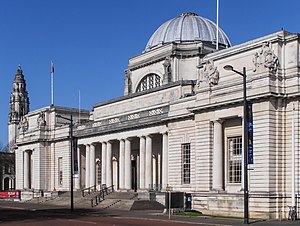 Amgueddfa Cymru – National Museum Wales, formerly the National Museums and Galleries of Wales, is an umbrella body which comprises seven museums in Wales:

In addition to these sites, the organisation runs Oriel y Parc, a gallery of Welsh landscape art in St David's, Pembrokeshire, in partnership with the Pembrokeshire Coast National Park Authority.[1] The National Collections Centre in Nantgarw is AC-NMW's storage facility. 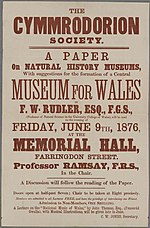 Poster by the Honourable Society of Cymmrodorion, 1876

The National Museum of Wales was founded in 1905, with its royal charter granted in 1907. Part of the bid for Cardiff to obtain the National Museum for Wales included the gift of the Cardiff Museum Collection, then known as "Welsh Museum of Natural History, Archaeology and Art," which was formally handed over in 1912. The Cardiff Museum was sharing the building of Cardiff Library, and was a sub-department of the library until 1893. It later moved to Cathays Park. The current Amgueddfa Cymru was founded around this institution, bringing other museums together.

The Welsh Folk Museum was crated at St Fagans in 1948, and after a number of name-changes it became the St Fagans National Museum of History.

Of the industrial museums:

The mueums and visitor numbers