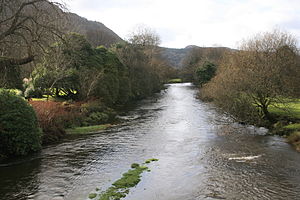 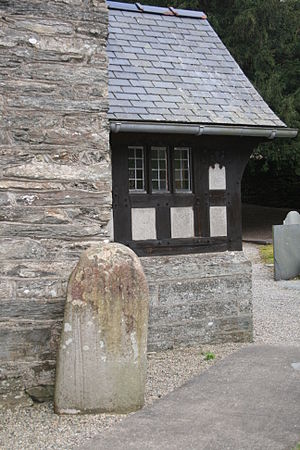 Maentwrog is a village and parish in Merionethshire lying in the Vale of Ffestiniog just below Blaenau Ffestiniog, within the Snowdonia National Park. The River Dwyryd runs alongside the village. It has a population of 585.[1]

The village lies on the A496 road between Harlech and Blaenau Ffestiniog, and also on the Roman road Sarn Helen, now classified as the B4410, at the junction with the A487 from Porthmadog, leading to the A470 (to Trawsfynydd and Dolgellau).

Nearby Plas Tan y Bwlch, substantially rebuilt during the 19th century by the rich Oakeley family on the site of a first house probably built in the early 17th century,[2] overlooks the village. Plas Tan y Bwlch has its own halt - Plas Halt - on the Ffestiniog Railway, and nearby Tan-y-Bwlch railway station is the railway's principal intermediate station. The National Gazetteer of Great Britain and Ireland (1868) stated that Tan-y-Bwlch was the postal town of Maentwrog.[3]

Maentwrog means "Twrog's stone" (maen = stone). According to legend, a giant known as Twrog hurled a boulder from the top of a hill down into the settlement, destroying a pagan altar. This stone is said to be the one located in St Twrog's Church courtyard. It is said that if one rubs this boulder one is fated to return to the village in the future.[4]

The name was already in existence at some time before this as it is said in Welsh mythology found in the Mabinogion that Pryderi was killed at the Glaslyn river and in Maentwrog is he buried.[5] The boulder supposedly hurled by the giant is also the one said to mark Pryderi's grave.[6]

The church is dedicated to the memory of Twrog, an eminent British saint, who lived in the 5th and 6th Centuries.[7] According to information in St Twrog's Church, based on a late addition to the Bonedd y Saint, there were four brothers and sons of Ithel Hael o Lydaw (Brittany) who came to Wales as Christian missionaries:

The village settlement expanded in the 19th century to house workers from local slate mines.[8] Within the village community is the imposing Plas Tan y Bwlch, home of the Snowdonia National Park Study Centre and former residence of the Oakeley family.

Maentwrog hydro-electric power station was opened in 1928, and still produces electricity today. It is supplied by water from Llyn Trawsfynydd, a large man-made reservoir located near the village of Trawsfynydd.[9]

There are two village inns: The Grapes, a 17th-century Grade 2 listed coaching inn near the parish church; and The Oakeley Arms, across the valley at Tan-y-Bwlch.

Edmund Prys, the poet and biblical translator, was born in nearby Llandecwyn, was rector between 1572 and 1624, and is buried inside St Twrog's Church.

Thomas Love Peacock lived at Maentrwrog in 1810, and subsequently married Jane Gryffydh, daughter of the parson.[10]

The British astrologer Russell Grant lives in nearby Tan-y-Bwlch.[11]