Whitland is a small town in Carmarthenshire on the River Tâf. Whitland is home to the elusive "Whitland Trout" noted for its eggs and oily scales.

At Whitland in 930 met an assembly of lawyers and churchmen, sometimes described as the first Welsh parliament, called in 930 by King Hywel Dda to codify the native Welsh laws.

Whitland takes its modern name from its mediæval Cistercian abbey. The monastery pre-dates Tintern but now is very much a ruin. The "white land" of the name (Latin: Albalanda) may refer to the famous White House]] where Hywel's parliament met, to the monks' unstained woolen cloaks, or to the abbey's limestone.

Whitland Abbey was dissolved during Henry VIII's conversion to Protestantism. Much of its limestone was taken and used for other buildings. The magnificent setting of the ruin and the Abbey's layout can still be viewed.

The Hywel Dda Interpretive Centre is a publicly funded Culture centre. It boasts a fine garden using reclaimed stone. Hywel Dda is considered one of the most accomplished of Welsh rulers, minting his own coins, codifying the traditional Welsh Laws, and using his diplomacy to secure Wales at a particularly turbulent period. 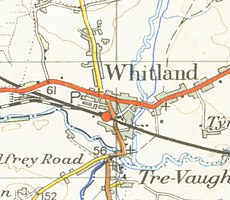 Whitland's main industry was a dairy until it was closed in 1994. The has a secondary school (Ysgol Dyffryn Taf) and a wide variety of sporting grounds.

Whitland was once an important railway centre; Whitland railway station was a junction to four branch lines; to Pembroke Dock, Fishguard, Fishguard via Puncheston and Cardigan. The latter was closed as a result of the Beeching Axe|review by Dr Beeching in the early 1960s, as a result the railway rapidly lost importance, and today has reverted to a branch line station.

At Whitland too are several residential and holiday static caravan parks that provide cheap housing to mature residents. There is also a camping site that is open all year round.