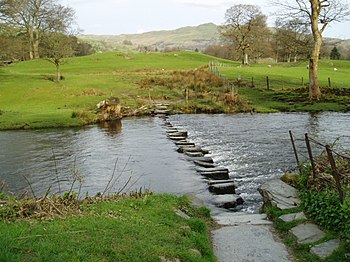 Stepping stones on the Rothay near Rydal

The River Rothay is a river in western Westmorland, which runs down through the most celebrated parts of that county, through Grasmere and Rydal Water and down to the head of Windermere.

The Rothay is a spate river. Its name comes from Old Norse and translates literally as the red river. It rises close to Rough Crag above Dunmail Raise at a point about 1,542 feet above sea level (NY306108): its basin covers Grasmere Common including Easedale Tarn, the southern flanks of Fairfield, and several of the fells to the east of Dunmail Raise, including Great Rigg, Rydal Fell, Scandale Fell and Heron Pike.

From its source the Rothay descends through the valley of Greenburn Bottom to Helmside, a hamlet not far from the main A591 road over Dunmail Raise. Just north of the Grasmere village the river subsumes Easedale Gill and Sour Milk Gill, the latter flowing out of Easedale Tarn. In the village the river flows close to the churchyard where the poet Wordsworth was laid to rest.

The Rothay then flows into the head of the Grasmere lake. As well as replenishing Grasmere, the Rothay also drains it, flowing for just half a mile from the southern end of the lake before replenishing Rydal Water at its western extremity. The Rothay drains Rydal from its easternmost point and then flows in a general southerly direction for about three miles before merging with the River Brathay at Croft Lodge south-west of Ambleside: from there the combined river flow into the northern end of Windermere.

About a mile north of Ambleside the Rothay is crossed by a well-known set of stepping stones.

Several sections of the Rothay are popular with canoeists, including the section between Grasmere and Rydal; the river is graded as 2+. The Rothay is a trout fishery where brown trout can be caught. Anglers should enquire locally about licences (an Environment Agency Rod Licence is required).