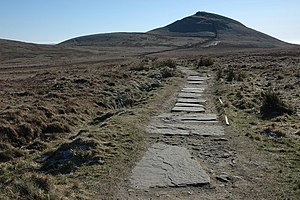 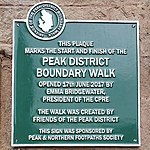 The start and finish point is at the King's Head pub in Market Place, Buxton, Derbyshire, a spot marked with a plaque installed by the Peak & Northern Footpaths Society.

The terrain covers open moorlands of the South Pennines, the limestone scenery of the Derbyshire Dales, woodlands, reservoirs and rural farming countryside. Most of the trail is in Derbyshire but also goes through sections of Staffordshire, Cheshire and Yorkshire. The total ascent is 25,000 feet, with a highest point of 1,660 feet at the summit of Shutlingsloe.[2] 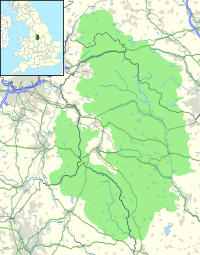 Map of the National Park 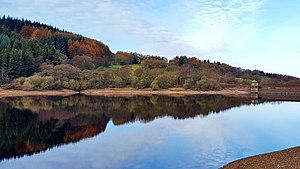 Fernilee Reservoir in the Goyt Valley

The trail has been divided into twenty stages of about ten miles long, in a clockwise direction around the Peak District.

From Buxton market place, along the Midshires Way past Staden Low, through Cowdale, down Deep Dale, along the River Wye up to Chee Dale, through Wormhill, to the west of Peter Dale and through Hay Dale nature reserve to Peak Forest.

From A623 road at Peak Forest across fields to Blackbrook (on the outskirts of Chapel-en-le-Frith), heading north across farmland to reach and follow the Pennine Bridleway, past Mount Famine and along the River Sett into Hayfield.

Along the Sett Valley Trail west out of Hayfield, north along the Pennine Bridleway, over Lantern Pike hill, through Rowarth, along Cown Edge Way (over Cown Edge ridge and the top of Coombes Edge) into Glossop

Along the west wide of Dovestone Reservoir, along the Oldham Way over Pots and Pans hilltop, along Shaw Rocks ridge, across fields to the east of Diggle, joining the Pennine Way over the moors, past Brun Clough and Black Moss, Swellands and Wessenden reservoirs, along the hillside heritage trail above Butterley Reservoir and down into Marsden

From Holme over the dam between Ramsden Reservoir and Brownhill Reservoir, up Crow Hill, along the Holme Valley Circular Walk across forested hillside, down the east side of Winscar Reservoir, along the Trans Pennine Trail by the south side of the River Don, across to and along the wooded north shore of Langsett Reservoir to Langsett.

Along the side of Damflask Reservoir, up lanes to and through Royds Clough woods, over the A57 road, through Wyming Brook nature reserve, through woods above Rivelin Dams reservoirs, past Redmires Reservoirs, along paths and lanes to Ringinglow, at the border of Derbyshire.

Entering Derbyshire, heading south along the Houndkirk Bridleway past woodland onto Houndkirk Moor, down through woods, up onto Totley Moor, along Brown Edge and Flask Edge, down a track off the moor, alongside Millthorpe Brook and along a lane and path through fields to Millthorpe. Out of Millthorpe to the west then south through Shillito Wood past the ancient stone cross, across open moorland past Nelson's monument on Birchen Edge, along a track around Gibbet Moor past Hob Hurst's House burial mound, down a path by Beeley Brook into Beeley.

Up the hillside to woods overlooking Chatsworth Park, back down to cross the River Derwent and the River Wye at Rowsley, down the lane past Stanton Woodhouse and up to Nine Ladies stone circle, continuing across Stanton Moor, down a footpath into Winster.

Around Hoe Grange and Ballidon limestone quarries, through Parwich village, heading south across fields to Fenny Bentley, following a footpath over the hill, crossing the Tissington Trail, along the lane into Thorpe.

Along the Limestone Way, crossing the River Dove from Derbyshire into Staffordshire.

Then following the Manifold Trail along the river upstream through Ilam, over the footbridge and up past Musden Low hilltop and back down into Calton village, following the steep footpath down to the River Manifold, downstream along the Manifold Way to Waterhouses on the A523 road and north to the hamlet of Waterfall.

Across fields to join the Hamps Way along the River Hamps, along a track over fields to Onecote village, heading north along a farm track over the hill beyond Mixon, along a minor road to the former Mermaid Inn, taking a footpath west down to Upper Hulme below The Roaches escarpment, along the Staffordshire Moors Walks to Tittesworth Reservoir.

Along a lane to Meerbrook across the reservoir, heading north up a footpath around the end of a ridge, across farmland to the River Dane, which marks the border of Cheshire, crossing the river on a footbridge.

In Cheshire, following footpaths across hilly farmland, up the lane beside Clough Brook to Wildboarclough.

Up and over Shutlingsloe hill summit (the highest point in the Boundary Walk), down the footpath into Macclesfield Forest, past the Trentabank, Ridgegate, Bottoms and Teggs Nose reservoirs, along the Gritstone Trail up through Tegg's Nose country park onward to Rainow village and along Kerridge Ridge past White Nancy monument to Bollington.

Rejoining the Gritstone Trail over Harrop Brook, following footpaths down to Macclesfield Canal, along the towpath before heading east into Lyme Park, over Higher Moor, across fields to Toddbrook Reservoir and into Whaley Bridge, which stands at the border of Derbyshire.

Out of Whaley Bridge along and criss-crossing the River Goyt, which is the border here between Cheshire to the west and Derbyshire to the east. Past Toddbrook Reservoir, along the Midshires Way before heading upstream alongside the River Goyt up to and along the west shore of Fernilee Reservoir, across Errwood Reservoir dam, definitively back into Derbyshire. Then along the disused Cromford and High Peak Railway line out of the Upper Goyt Valley, down across the Cavendish golf course, through Buxton Pavilion Gardens and up to the market place.