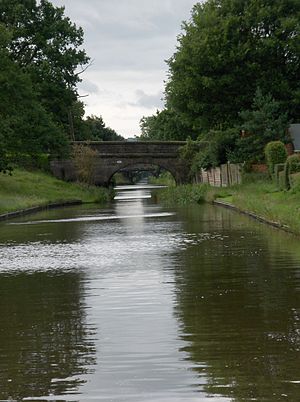 The Macclesfield Canal is a canal in east Cheshire, one of the six that make up the Cheshire Ring. 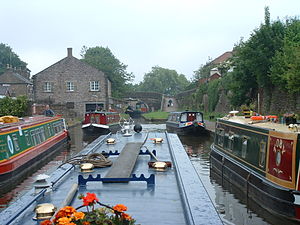 The canal runs 26 miles from Marple Junction at Marple, where it joins the Upper Peak Forest Canal, 16 miles, southwards (through Bollington and Macclesfield), before arriving at Bosley.

Having descended the 12 Bosley Locks over the course of about a mile, the canal continues through Congleton to a junction with the Hall Green Branch of the Trent & Mersey Canal at Hall Green stop lock (the branch itself joins the main line a mile further on at Hardings Wood Junction, near Kidsgrove).

The canal was initially proposed at a public meeting held on 22 September 1824 at the Macclesfield Arms in Macclesfield.[1] Unlike earlier canals, the spectre of the arrival of the railways was already in sight, and at least one present at the first meeting suggested that a railway might be built.[1]

Construction of the canal began at Bollington on 4 December 1826, with the ceremonial cutting of the first sod,[2] and progressed steadily.

By the autumn of 1829, when engineer Thomas Telford inspected the works, he pronounced himself satisfied with the works.[2]

The formal opening took place on 9 November 1831, with ceremonial processions of boats from Congleton and Marple proceeding towards Macclesfield, meticulously timed such that boats would arrive at Macclesfield from both directions at the same time, upon arrival, a salute was fired, and the Band of the Macclesfield Cavalry played God Save the King, before the proprietors and dignitaries retired to the Town Hall for dinner.[3]

By 1838, the canal company was looking to expansion, and sought to build a branch from Buglawton to Biddulph, to serve the coal mines. Initially proposed as a canal, and later as a railway, the plan was eventually dropped after it met with a less than enthusiastic reception from shareholders who were seeking a more substantial dividend, rather than re-investment of profits, and from the mine owners.[5]

In the same year, the company joined forces with the Trent and Mersey Canal Company in a successful move to oppose a move to open a new canal from Middlewich to Altrincham.[6]

The arrival of the railways

As with so many British canals, the arrival of the railways led to the decline of the canal.

By 1845, the spectre of railway competition was looming large, and the proposals for the Trent and Mersey Company to merge with a railway company were causing concern.[7]

At the same time, the canal had already begun its diversification into the leisure market, which would form such a large part of its future, with swift packet boats carrying leisure traffic from the (now closed) Dukinfield railway station, close to Dukinfield Junction on the Peak Forest Canal to Disley, Lyme Park and Macclesfield at fares of 1-1½d per mile.[7]

The company, seeing that engaging in head to head competition with the railways, was doomed to failure, opened negotiations with the North Staffordshire Railway in October 1845. The proposals from that company were rejected by the shareholders.[7]

By June 1846, however, the company had negotiated an alternative arrangement with the Sheffield, Ashton-under-Lyne and Manchester Railway. Under the terms of this agreement, the railway company took out a perpetual lease of the canal at an annual rate of £2 10s per share (broadly equivalent to the dividend hitherto paid by the canal company).[7]

At the time it took out its lease, the Sheffield, Ashton-under-Lyne and Manchester Railway was itself at an advanced stage in negotiating a merger with other railway companies, and on 1 January 1847, ownership of the canal passed to the Manchester, Sheffield and Lincolnshire Railway (later renamed Great Central Railway).

On 29 February 1912, the canal burst its banks at Kerridge, flooding several nearby streets.[8]

Finally, in 1922, under grouping, the canal passed into the ownership of the London and North Eastern Railway.

After World War II, in common with many other canals, the canal started to suffer from a lack of maintenance, although commercial carrying on the canal continued into the 1960s.[9]

The threat of closure hung over it until the 1968 Transport Act came into force.

The following are all Grade II listed:[10]

When it appeared that Harecastle Tunnel, on the Trent and Mersey Canal, might have to close permanently because of mining subsidence, one of the solutions mooted was to make a connection between the Leek Branch of the Caldon canal and the Macclesfield canal at Bosley, via Leek and possibly Rudyard Lake; however Harecastle Tunnel remains open to navigation.

Organisations associated with the canal

The canal is home to Britain's oldest canal cruising club, the North Cheshire Cruising Club. It was formally founded in 1943 although it has pre-war origins. The cruising club played an important role in preventing the canal from closing.[11] 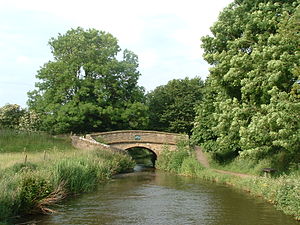 A roving bridge on the Macclesfield Canal

The Hall Green Branch, whilst originally built by the Trent & Mersey Canal Company, is often considered as part of the Macclesfield Canal in modern maps and guidebooks. Hall Green Stop Lock survives, with its rise and fall of about a foot; this was to prevent the Trent & Mersey losing water to the Macclesfield in the event of a breach in the latter. There was also a Stop Lock at Marple, although both canals were built to the same level, and the lock was provided only for cases where water shortages might have resulted in a temporary difference.[12] The lock has long been de-gated, having become unnecessary once the Macclesfield and Peak Forest canals came into common ownership.[7] The site of the lock remains as a narrows just in front of the junction bridge, as seen in the accompanying picture, overhung by a loading canopy.

The only flight of locks on the canal, at Bosley, are unusual for a narrow canal in having mitre gates at both ends, rather than the usual arrangement of a single top gate.

There are no tunnels on the Macclesfield Canal, but there are several impressive embankments, e.g. at Bollington and High Lane on the upper section, and over the River Dane on the lower section, close to Bosley bottom lock.

The Macclesfield Canal is renowned for its elegant roving bridges, locally known as Snake Bridges.