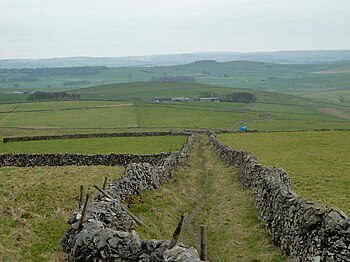 The Limestone Way near Peak Forest

The Limestone Way is a long-distance bridleway primarily in Derbyshire, which runs over the White Peak of the Peak District. The route is from Castleton in the southeast to Rocester over the county boundary in Staffordshire.

The trail originally ran to Matlock, but was diverted to its current, longer route in order to join up with the Staffordshire Way. The trail is named for the limestone scenery along its route

The route was created by the local council.[1]

From Castleton, the route runs up Cave Dale, past Peak Forest, down Hay Dale and Peter Dale, parallel to Monks Dale then through the village of Millers Dale.

It then passes Blackwell and runs through Flagg and Monyash, across Cales Dale and past Youlgreave through Bradford Dale.

The route then continues past Robin Hood's Stride to the villages of Elton, Winster and Bonsall, after which it crosses the Midshires Way.

The trail runs through Parwich and crosses the Tissington Trail before running through Tissington itself and Thorpe, then down into Dovedale at Ellastone on its approach to Rocester.

Spurs link Bonsall to Matlock (along the old route of the path) and from Thorpe to Ashbourne.