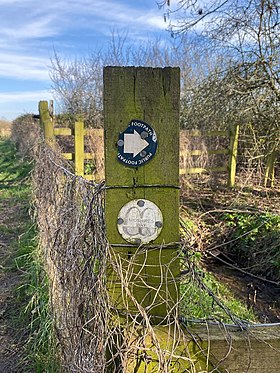 Trail marker on the Midshires Way

The Midshires Way is a long-distance footpath and bridleway that runs for 230 miles through the counties of the Midlands, from which it tales its name.

The rail, from south to north, runs from near Bledlow in the Chiltern Hills in Buckinghamshire to Stockport in Cheshire. On it course, the Midshires Way runs through Buckinghamshire, Northamptonshire, Leicestershire, Nottinghamshire, Derbyshire and Cheshire

The route also links several other long-distance walking routes or trackways including The Ridgeway, the Buckinghamshire Way, the Pennine Bridleway and the Trans Pennine Trail.

The route was opened in 1994 as a collaboration between numerous bureaucracies and user groups. It is intended as a multi-user trail but there are places where the recommended route for walkers differs from the route for horse riders and cyclists.

The Midshires Way starts from Wain Hill (SP770012), between Bledlow and Chinnor.[1] From there it runs near Princes Risborough, north to Waddesdon and on to Winslow then in a north-west direction passing through Milton Keynes.

North of Milton Keynes, the route it passes to the west of Stoke Goldington before crossing the Great Ouse, which is the county border, into Northamptonshire near Haversham.

The section of the Midshires Wat through Northamptonshire is 46 miles long.

After passing through Willoughby on the Wolds, the route tracks west, turning north just outside Kegworth before turning north towards Derbyshire.

Derbyshire and the Cheshire border

The Derbyshire section starts in the east of the county at Sawley near Long Eaton running to Duffield then linking with the High Peak Trail close to Wirksworth. The route passes through the Peak District National Park and on to Buxton ('Queen of the Peak').

West of Buxton, the trail reaches the Goyt Valley: the River Goyt here marks the county border with Cheshire. Following the river, initially on the Cheshire side, the route runs down the valley for the rest of its path. It crosses back to Derbyshire at Whaley Bridge and continues in the latter county until Marple, where it definitively enters Cheshire.

The trail enters Cheshire at Marple, and follows the Goyt into Stockport. Here it meets the Trans Pennine Trail which heads off up the Tame Valley. The trail finishes in Stockport (SJ893903).[2]

The section between Whaley Bridge (Cheshire/Derbyshire) and Compstall is separately waymarked and marketed as the Goyt Way.[3]