Chapel-en-le-Frith is a small town in Derbyshire, found on the edge of the Peak District near the border with Cheshire and 21 miles from Manchester. It is dubbed "The Capital of the Peak District" at least locally, a claim that would be disputed, politely, by Buxton

Chapel-en-le-Frith was established by the Normans in the 12th century, originally as a hunting lodge within the Forest of High Peak. This led to the French-derived name of Chapel-en-le-Frith ("Chapel in the forest").[1] The population of 'Chapel', as the locals commonly refer to it, is approximately 10,000. Despite the lack of flat ground, the town has a golf club, a cricket club and a football club. It has two schools too.

The first chapel in the town gave it a name, though that chapel was demolished during the Middle Ages and replaced by the current parish church, St Thomas Becket. The church stands at the highest point in the town.

The current church is now almost entirely of 18th-century construction. Buried in the churchyard are soldiers of the Scottish army of the Duke of Hamilton who marched south in support of King Charles I in 1648. After their defeat at Preston, they were marched to Chapel and imprisoned in the church for sixteen days in such squalid conditions that forty died; a further ten died when they were marched towards Cheshire. The Eccles Pike Cross lies in the churchyard. It was moved here from Ollerenshaw Farm in 1925. It is believed to be Anglo-Saxon and is covered in very worn carvings.[2]

A curfew bell has been rung in the town since 1070, and on Shrove Tuesday a Pudding Bell is rung at eleven in the morning to remind housewives to prepare their batter.

There is a regular market place, cobbled and raised above the High Street, which is still used every Thursday to host the local market (though due to the current economic climate the number of stalls present has declined considerably). A market cross has a faint date which may read 1636, but the cross itself is considerably older.[2]

There is a certain amount of industry — especially behind the church in the lowest part of the town, where the brake-lining manufacturer Ferodo (an anagram of Frood, the 19th-century founder's name, with the addition of a letter "e") was a family concern for over a hundred years; it is now part of the international conglomerate Federal-Mogul.

Chapel Poor Law Union was established in December 1837. The union workhouse was built c.1840 on the Whaley Bridge road (SK051805). It consisted of an entrance range and an accommodation block of three wings centred on an octagonal hub, an infirmary and an isolation hospital. The workhouse was later converted to an old people's home, and was demolished in the early 1980s.[3]

To the north lie the Dark Peak highlands, which are made up of millstone grit and are heather-covered, rugged and bleak. Here are Chinley Churn and South Head with, a little further off, Kinder Scout, which looms above the whole area.

To the south is the gentler and more pastoral White Peak, consisting largely of limestone grasslands, nevertheless with spectacular bluffs and the occasional gorge. Combs Moss, a gritstone 'edge', dominates the valley in which Chapel lies from the south and Eccles Pike rises sharply above the town to its west. 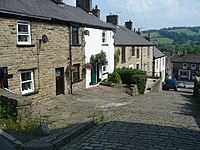