Marsden is a large village in the West Riding of Yorkshire, located seven miles west of Huddersfield at the confluence of the River Colne and the Wessenden Brook. It was formerly an important centre for the production of woollen cloth, focused at Bank Bottom Mill, which closed in 2003. According to a 2008 mid-year estimate the village has a population of 4,440.[1]

Marsden grew wealthy in the nineteenth century from the production of woollen cloth. It is still home to Bank Bottom Mill, later known as Marsden Mill, and home to John Edward Crowther Ltd, formerly one of the largest mills in Yorkshire. The Crowthers moved to Marsden in 1876, beginning a long and profitable association with cloth manufacturing in the town.[2][3]

The present Church of St Bartholomew was completed in 1899, although the nave and aisle had been in use from 1895, when the previous chapel was demolished. The tower was built in 1911, and the Parochial Hall in 1924 (with an extension in 1978). The church has a peal of ten bells.[5]

Marsden is the last significant settlement on the Yorkshire side of Standedge crossing of the Pennines into Lancashire. The village is surrounded on three sides by the high moors which are called Marsden Moor and Meltham Moor although Saddleworth Moor is very close. Saddleworth Moor is known for the place of burial for the moors murders. Marsden has low level access only from the east along the Colne Valley.

Several generations of tracks and roads have crossed the moors at this point. There are two distinctive packhorse bridges in the town (Mellor Bridge by the church, and Close Gate Bridge at the edge of the moor to the east of the village), whilst the current A62 main road crosses through the Standedge cutting some 2½ miles to the west. Both the Huddersfield Narrow Canal and the Huddersfield to Manchester railway also pass through Marsden, entering the parallel rail and canal Standedge Tunnels about half a mile to the west of the town. Marsden railway station is located in the village on the railway line.

Marsden Moor Estate, which surrounds Marsden to the west and south, and includes several reservoirs, is in the care of the National Trust. The Trust is developing new techniques to rehabilitate the moor.

Butterley Reservoir with its distinctive spillway is one of the reservoirs near Marsden.[6] In chronostratigraphy, the British sub-stage of the Carboniferous period, the Marsdenian derives its name from Marsden. 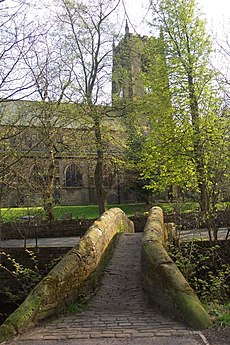 Mellor Bridge, one of Marsden's two packhorse bridges, with St Bartholomew's Church in the background

The Holme Valley Mountain Rescue Team has its headquarters in Marsden. Operating from two bays of Marsden Fire Station, the volunteer team provides rescue cover for surrounding moorland areas, and also assists West Yorkshire Police with searches for missing people. The team was founded in 1965 and was originally based in Meltham before relocating to Marsden in 2005.

Above the village at Hemplow, on Mount Road (at the terminus of the Hard End bus service), is a sports ground which hosts Marsden's cricket,[7] golf and tennis clubs, as well as Hemplow Bowling Club. The cricket club, formed in 1865, runs two teams in the Drake's Huddersfield Cricket League[8] and teams in four age groups in the Huddersfield Junior Cricket League.

Marsden Silver Prize Band is the local silver band.[9] The village hosts festivals and cultural events throughout the year. Marsden Cuckoo Day, a day-long festival held annually in Spring (April), holds clog dancing, a duck race, music, a procession and a "cuckoo walk". The Marsden Jazz Festival[10] is held every October, and the winter Imbolc Festival, in which the 'triumph of the Green Man' (who represents the coming spring), over Jack Frost (the winter) is celebrated with fire juggling and giant puppets.[11] Marsden is the home of Mikron Theatre Company,[12] the world's only professional theatre company to tour by Narrowboat.

Marsden's 'Cuckoo Day festival' is named after a local legend of the Marsden Cuckoo:

"Many years ago the people of Marsden were aware that when the cuckoo arrived, so did the Spring and sunshine. They tried to keep Spring forever, by building a tower around the Cuckoo. Unfortunately, as the last stones were about to be laid, away flew the cuckoo. If only they'd built the tower one layer higher. As the legend says, it 'were nobbut just wun course too low'."[13][14]

In 2010 Marsden gained Walkers are Welcome status in recognition of its well-maintained footpaths, facilities and information for walkers and ramblers.[15] Tunnel End in Marsden, the eastern entrance to Standedge Tunnel. 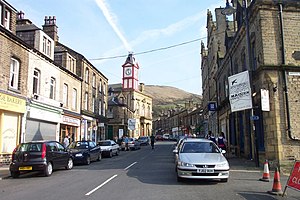 Peel Street, the main street of Marsden, with the Mechanics Institute.

Marsden has its own railway station, which is based to the north of the village. Services operate along the Huddersfield Line between Huddersfield and Manchester Victoria with some Sunday journeys running to Leeds.

Use as filming location

Marsden is popular as a location for television and film productions. These productions have used the village:

Marsden was the birthplace of Henrietta Thompson, the mother of General James Wolfe who took Quebec from the French in 1759.