Didcot is a town and ancient parish in the Moreton Hundred of Berkshire, about five miles miles south of Abingdon. It lies in the broad, flat plain of the River Thames, which river flows about two miles to the north of Didcot, and having turned south, five miles to the east of Didcot too, at Wallingford. The town has long since expanded into the neighbouring parishes of Hagbourne, Harwell and Sutton Courtenay.

Didcot is known for its industry: the vast cooling towers of Didcot power station were visible for many miles across the countryside, until their final demolition in 2019.

Despite the iron hand of industry, Didcot has a nature reserve, Mowbray Fields, where wildlife including a species of common spotted and southern marsh orchids can be found. 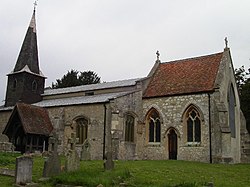 Settlement in the Didcot area dates back to the Iron Age. The settlement was situated on the ridge in the town, and the remainder of the surrounding area was marshland.

The Romans attempted to drain the marshland by digging the ditch that runs north through what is now known as the Ladygrove area north of the town near Long Wittenham.

Didcot first appears in historical records in the 13th century as Dudcotte. The name is believed to be derived from that of the local abbot. Didcot was then a sleepy rural Berkshire village with a population of 100 or so and remained that way for hundreds of years, only occasionally cropping up in records. Parts of the original village still exist in the Lydalls Road area and part of All Saints' Church dates back to the 11th century. It was much smaller than several surrounding villages, which are now dwarfed by modern Didcot.

A number of major scientific employers are here or nearby, including the United Kingdom Atomic Energy Authority at Culham (and the Joint European Torus (JET) fusion research project), Harwell Laboratory, the Science and Technology Facilities Council (the research council responsible for Rutherford Appleton Laboratory) and the Diamond Light Source synchrotron, which is the largest British-funded scientific facility to be built for over 30 years. Didcot is also the base of operations for the Baptist Union of Great Britain and BMS World Mission. 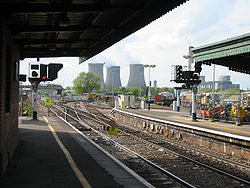 The Great Western Railway, engineered by Isambard Kingdom Brunel, reached Didcot in 1839. In 1844 the Brunel-designed Didcot station was opened. The original station burnt down in the later part of 19th century. The more obvious location for the original line to Bristol would have been the town of Abingdon a little further north, but the landowner, Lord Wantage, is reputed to have prevented the railway coming close to the town. This and the junction of the Great Western line to Oxford created the conditions for the future growth of Didcot. The station's name also finally fixed the spelling of Didcot.

Didcot's junction of the routes to London, Bristol, Oxford and to Southampton by way of the Didcot, Newbury and Southampton Railway (DN&S) made the town of strategic importance to military logistics, in particular during the First World War campaign on the Western Front and the Second World War preparations for D-Day. The DN&S line has since closed and the sites of the large British Army|Army and Royal Air Force ordnance depots that were built to serve these needs have disappeared beneath the power station and Milton Park Business Park. However the Army still has Vauxhall Barracks on the edge of town.

Remains of the DN&S line are still in evidence in the eastern part of town. This line was constructed from 1879-1882 after previous proposals had floundered and was engineered by John Fowler and built by contractors T.H. Falkiner and Sir Thomas Tancred, who together also constructed the Forth Bridge.[1] It was an extremely expensive line to build due to the heavy engineering challenges of crossing the Berkshire and Hampshire downs, and this over capitalisation coupled with initial traffic barely meeting expectations caused the company financial problems, meaning it never reached Southampton of its own accord but had to join the main LSWR line at Shawford, south of Winchester. But from the outbreak of WW2 such was the growth of wartime traffic to the port of Southampton a decision was made to upgrade the line which included the complete doubling of the northern section between Didcot and Newbury, closing for 5 months in 1942/3 whilst this was carried out. Although passenger trains between Didcot and Newbury were withdrawn in 1962, the line continued to be used by freight trains for a further four years, mainly oil traffic to the north from the refinery at Fawley near Southampton. In 1966 however, this traffic also was withdrawn, and the line was then dismantled. A section of the abandoned embankment toward Upton has fine views across the town and countryside and is popular with walkers.

After Second World War technology changed, with steam locomotives becoming obsolete and the motor car becoming common. The station was renamed "Didcot Parkway" in 1985 and the site of the old GWR provender stores which had been demolished in 1976 (the provender pond was kept to maintain the water table) became a large car park so that the station would attract travellers from the surrounding area. The locomotive depot became the Didcot Railway Centre in 1967. 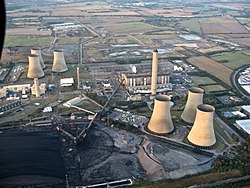 The Didcot Power Stations (between Didcot and Sutton Courtenay) supply electricity to the National Grid. Country Life magazine voted these the third worst eyesore in Britain, but some locals refer to them as "the Cathedral of the Vale", a title more properly belonging to the parish church at Uffington.

The power station cooling towers were visible from up to 30 miles away due to their location on the plain, but they still managed to win once an award for reducing visual impact as they were six towers in two well-separated groups half a mile apart rather than a monolithic 3x2 block used at Fiddlers Ferry Power Station by Widnes in Lancashire, sometimes known as Didcot's 'sister' station. The power station has also proved a popular man-made object for local photographers.

In October 2010, Didcot Sewage Works became the first in Britain to produce biomethane gas supplied to the national grid, for use in up to 200 homes in Berkshire and Oxfordshire.[2]

Didcot is no longer the small viilage of past ages but is now home to around 24,500 people, with a new town centre, The Orchard Centre, which opened in August 2005. It took a further 2 years or so before nearly all the leases in the centre had been rented out by companies. To this day, there are still some empty shops, due to the economic climate.